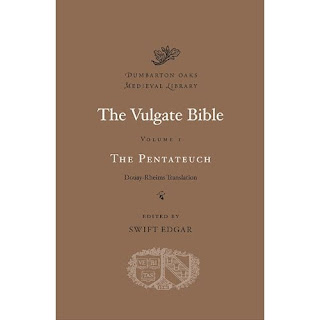 Many thanks to reader Theophrastus for this thorough review of the Harvard University Press The Vulgate Bible, Volume 1: The Pentateuch.

Below is his full review:

Harvard University Press, together with the Dumbarton Oaks Library, has launched a new book series called the "Dumbarton Oaks Medieval Library". The inaugural volume is a new version of the Pentateuch in a new reconstructed Vulgate and an updated Douay-Rheims translation; and the next release of books features the Prophets: (ISBNs0674055349, 0674996674, 0674060776). Although I have only spent a small amount of time with the new Pentateuch, I can say that it is easily the nicest Latin-English Bible diglot I have ever seen, and a worthy addition to any Bible collector's library.

The new Pentateuch volume is edited by Swift Edgar, a researcher at Dumbarton Oaks, and is quite generous in size with 36+ 1151 pages with 11 extra blank pages at the end. It is a hardcover, and the dimensions of the book are 8.4 x 5.5 x 2.3 inches (I know that is different from Amazon's listed dimensions, but I actually measured the book). This means that this book is nice and thick, and it features creamy thick paper with very generous margins (7/8" on the top and sides, and usually over an inch on the bottom) and nice, big print (I'm guessing 11 point.) This is a book for taking notes, and best of all, has minimal bleed-through. There is a single ribbon for keeping one's place.

The text is rather interesting. The editor presents substantial evidence that Gregory Martin began his translation in 1578 and (after proof reading by two fellow professors) completed it 676 days later, with publication being delayed until 1609-1610 by the exile to Rheims. This of course is consistent with introductory "To the right vvelbeloved English reader" which states that the Bible was translated"about thirtie yeares since" but "as for the impediments, which hitherto haue hindered this worke, they al proceded (as manie do know) of one general cause, our poore estate in banishment."

The English text is revised from the 1899 revision of the Challoner's revision of the Douay. Punctuation and transliteration of proper nouns and adjectives have been brought into modern practice; also, some printer errors in the 1899 version have been corrected by reference to the original Challoner 1750 and 1752 versions. "In addition, the whole text has been prepared according to the guidelines of the fifteenth edition of the 'Chicago Manual of Style.' This policy has resulted in significant alterations to Challoner's edition, which superabounds in colons and commas, lacks quotation marks andbegins each verse on a new line.... In contrast to most English Bibles, this volume renders all of the text as prose, even the partsthat were originally in verse, since neither the Latin nor the Englishis poetic." All of Challoner's notes have been excised, although the text keeps Challoner's chapter summaries.

The most interesting part is the Latin text of the Bible. "While the English College was working on its translation at Douay and Rheims, Pope Sixtus V (r. 1585-1590) called for the preparation of an authoritative Latin text. This Latin Bible was published in 1590, just prior to his death, but it contained errors and was soon suppressed for fear that Protestants would use them to attack the Catholic Church. Three corrected printings followed, in 1592, 1593,and 1598, during the papacy of Clement VIII (r. 1592-1605). These four editions, substantially the same, are referred to the Sixto-Clementine Version. While it strongly resembles the Latin Bible that evidently served as the basis for the Douay-Rheims translation, the two are not identical." (Indeed, note that Gregory Martin died adecade before the initial publication of the Sixto-Clementineversion.) This version presents a reconstructed Latin text based on the English evidence of the Douay-Rheims, drawing on the critical apparati in Weber's 5th edition (2007) and Quentin's edition(1926-[1995]).

The result is a fascinating rendition of the Latin -- one that explains mysteries that many of us have noticed in English renderingsof the Douai-Rheims that differ from the Sixto-Clementine version. Of course, many people have strong preference for the Sixto-Clementine (for example in the 1959 Vatican City edition) version, holding, like the introduction to the 1609 Douay:

"But here an other question may be proposed: VVhy we translate the Latin text, rather than the Hebrew, or Greke, which Protestantes preferre, as the fountaine tongues, wherin holie Scriptures were first written? To this we answer, that if in dede those first pure Editions were now extant, or if such as be extant, were more pure than theLatin, we would also preferre such fountaines before the riuers, in whatsoeuer they should be found to disagree. But the ancient bestlerned Fathers, & Doctors of the Church, do not much complaine, andtestifie to vs, that both the Hebrew and Greke Editions are fouly corrupted by the Iewes, and Heretikes, since the Latin was truly translated out of them, whiles they were more pure."

Despite this version of the Latin text being reconstructed, and thus necessarily artificial, it is highly readable Latin and arguably is as close to the version Gregory Martin used as we can hope to get.

The end result is a very convenient and very easy to use diglot. Besides its merits as a Latin edition, it has the nicest version of Challoner that I've seen (and, having restored many changes made by the 1899 revisers to the original 1750 and 1752 form, is more true to Challoner) and the result is English that is reasonably concordant to the Latin. This stands in marked contrast to editions such as the Baronius Press "Douay-Rheims and Clementina Vulgata: English-Latin Bible" (ISBN 1905574444) where the sharp differences between the meaning of the Latin and the meaning of the English often leave thereader gasping and wondering how an edition with such divergent readings could have appeared. Further, in contrast to the cramped, tiny print of the over-sized Baronius, the easy-to-old Harvard edition is a pleasure to use, read, and mark with personal annotations. (The drawback, of course, is that the Harvard edition is appearing in multiple volumes, as opposed to the single-volume Baronius. However, the Baronius is not convenient to use , and while it may have value as a reference volume, I doubt many readers sit down and read it cover to cover.)

At the other extreme, the Weber and Quentin Vulgates, although very scholarly, are hardly convenient to sit down and read; (and for thosewho have intermediate Latin skills, reference to an English version isuseful anyway); in contrast, this new Harvard edition is a wonderful reading version of the Vulgate.

I think that this version will set the new standard for Latin-English diglots of the Bible. I predict that just as the Harvard Loeb volumes have become the convenient reading version for those readers who want consult the Greek and Latin classics (with a matching English translation), I suspect that the Harvard Vulgate will become the standard version for those readers who actually wish to read the Vulgate in Latin. Even if one has English but no Latin at all, the elegant design of this volume commends itself to the reader. I am glad I bought it and look forward to spending a lot of time with it.

Thanks for this review! Do you know when the whole set will be completed?

I've heard of English translations of the Vulgate, but I've honestly never heard of a Latin translation of the Douay-Rheims. Do we not have manuscripts from the Middle Ages for the Vulgate?

Well, I'm not sure I would call it a Latin translation of the Douay-Rheims, although the point is not that far off.

We do have medieval manuscripts of the Douay-Rheims -- notably, the four Sixto-Clementine versions (which post-date the Douay-Rheims). But we know for a fact that the Sixto-Clementine was changed from earlier versions -- and there has long been an attempt to reconstruct a "pure" Vulgate. The most famous example was that of Pierre Sabatier, a Benedictine monk (editions published at Rheims 1739 and 1749, and in Paris at 1751). More modern examples are Weber and Quentin.

This attempt is unusual in that it attempts not to develop a pre-Jerome Vulgate or a Jerome Vulgate but rather a Vulgate just a few years before Sixto-Clementine became the standard for the Catholic world.

It's a nice edition, yes, but as you point out, the text is completely artificial: it's not something that anyone would have read at any point in history. Moreover, for a Bible that is supposedly "medieval", the DRC translation is representative of a much different current of thought. A project that might actually have been useful would be to punctuate the Weber-Gryson text and change the translation to match it. It would be both more medieval (and thus what is being advertised) and truer to the Hebrew and Greek (which the earlier Vulgate was), and thus more akin to the true spirit of what Martin hoped to accomplish. As it is, it's completely useless, and has absolutely no scholarly credibility. (And, besides, who can afford the full set?) I'd say that it's far more worthwhile to read the Weber-Gryson version.

Can you post pictures of the actual book itself