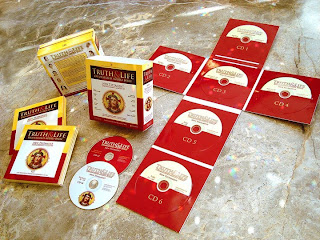 As mentioned last month, the Truth & Life Dramatized Audio Bible RSV-CE New Testament will be released sometime this month, on both CD and I-Tunes. (I hope to get a precise date soon on when exactly they will be released.) As far as I can tell, it will be the first dramatized edition of a Catholic Bible in English. It has a host of well-known actors involved in the project. It is endorsed with an Imprimatur from the Vatican and includes a foreword by Pope Benedict! The picture on the left surfaced at the Truth & Life Facebook site. The complete audio New Testament is 22 hours long on 18 CDs.

Update: I talked with someone involved with the Truth and Life project who said that the release date should be in about 3 weeks.

The set is now available on Amazon.