Thanks to Jason for providing this guest review! 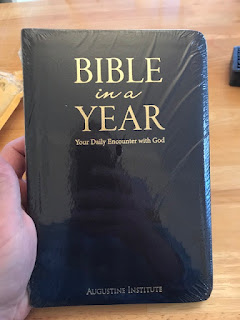 When the Augustine Institute announced earlier this year that they were producing a new Bible in a Year with daily commentary and in a leather-bound edition, I pre-ordered it immediately. I’m a big fan of editions of the complete Bible arranged in daily readings. They are prevalent in Protestant editions, but Catholic ones are harder to come by. The One-Year Bible, which was first published with the NLT text and later with other translations, is the gold standard, arranging the readings with a little OT, NT, and Psalms/Wisdom literature read each day.

To my knowledge, the only Catholic contender until now has been My Daily Catholic Bible from Our Sunday Visitor, which has been published in RSV-CE and NAB editions. It has some nice features, such as a quote from either the saint of the day or another saint speaking about the day’s feast or about the Scriptures. It also gives you readings from the OT and NT each day, although the wisdom literature is included in the OT, as opposed to being a third reading on its own. I felt at times that the readings were quite uneven in length from day to day, though I haven’t done a close study to confirm that. Also, the only binding available is paperback. 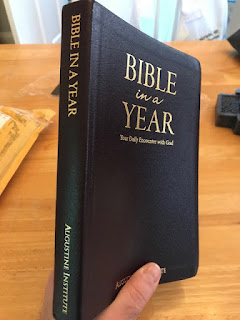 The Augustine Institute’s Bible in a Year (RSV-2CE) is also available in paperback, but for a bit higher price a leather edition is also available. This latter edition you can see in the photos. Though I’m not an expert with leather, it is almost certainly bonded, so far from premium (despite the publisher’s description), but it has a great size and weight. It’s glued instead of sewn, which is easily the biggest knock against it at a $50 price point. The paper is white with clear dark text. There is some ghosting but it appears to be line-matched, and it is very comfortable to read. I’m not sure about the type size, but it appears to be the same as the standard Ignatius RSV-2CE. With the bright white paper and darker text, though, I think it’s easier to read than the Ignatius edition. There is one yellow ribbon, which is perfect for this type of Bible.

As for the content, this is every bit the equal of The One-Year Bible. Each day has a manageable reading from the OT, a short reading from the Psalms or Wisdom lit, an NT reading, and a closing reflection. This really is an ideal way to read the Bible in a year. Flipping through the volume, it appears that each OT reading is a bit over two full pages, and seems more or less consistent. Each of the three sections reads through in (RSV-CE) canonical order (Genesis-2 Maccabees, Psalms-Song, Matthew-Revelation). This is perhaps my one disappointment in the layout. Why not spread the Gospels out over the course of the year, reading the epistles in between? But this is a minor quibble. The daily reflections are, as you can see from the photos, the length of a long paragraph and provide a bit of background and give you something, in the form of a closing question, to think about in light of the day’s readings.  All in all, I think this is an excellent resource. 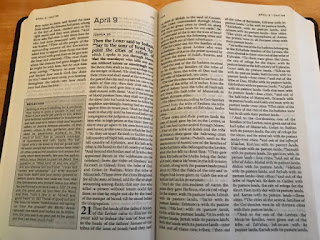 One closing note: I ordered this in October and just received it in on December 20. They sent out an email saying they had printing issues which delayed the first pre-orders being shipped until now. If you notice on the order page now, it warns that new orders won’t ship until late January. So, be aware that getting one before January 1 is likely impossible.

Email ThisBlogThis!Share to TwitterShare to FacebookShare to Pinterest
Labels: Augustine Institute, Bible in a Year, RSV-2CE

Thank you to Michael and Dr. von Peters for letting me know about the following two items:

The Catholic Youth Bible 4th Edition from St. Mary's Press.  It will be available in both the NABRE and NRSV translations. 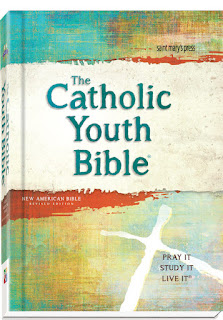 We know that faith means little unless it is lived, so these Challenge features charge youth to bring the Scriptures to life through specific, suggested actions!

Interact with Scripture:
In Scripture Highlights, encouraging verses are featured to offer an opportunity to reflect and are designed so youth can color them!

Nourish Relationships:
The Searching for God features offer reflections and prayers that focus specifically on aspects of our relationship with God, and the Who Is My Neighbor? features focus on our relationship and responsibility to others as a Christian community.

Explore the Bible:
Young people can explore the scripture easily with themed Reading Plans, as well as When I'm Feeling verses that help youth explore what the Bible might say to them about their own life experiences and feelings.

Christmas Special, only good until Feast of the Magi, and then the price will return to the normal price of $79.95. NOTE: This is for the download version only, and not with CD, at the low price of $59.95.

For more on the REAL Douay-Rheims Bible, you can see my interview and review here.
Posted by Timothy at 4:42 AM 1 comment:

Thomas Merton on the Psalms 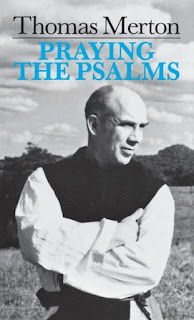 Yesterday was the 49th anniversary of the death of Thomas Merton.  Anyone who has taken the time to read his works knows that the Psalms were vitally important to him.  Praying them in choir as a monk, as well as on his own, the Psalms helped to form him and his writings.  Liturgical Press publishes a short, but very insightful book by Merton on the Psalms called Praying the Psalms.  If you haven't read Merton before, it is a great entry point for his writings.

"...the Psalms not only form our minds according to the mind of the Church, not only direct our thoughts and affections to God, but they establish us in God, they unite us to Christ. But they do this only if our hearts follow their thoughts and words back to the inspired source.... Therefore the sentiments of the Psalmist, which are the thoughts and sentiments of God Himself in His Church, must lead us into the hidden sanctuary of God. Where our treasure is, there will our hearts be also. The function of the Psalms is to reveal to us God as the 'treasure' whom we love because He has first loved us, to hide us, heart and soul, in the depths of His infinite Light. The Psalms, therefore, lead us to contemplation." -Praying the Psalms
Posted by Timothy at 6:33 AM 7 comments: 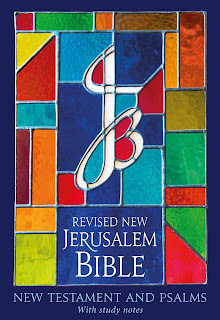 As expected, the listing on Amazon.com for the Revised New Jerusalem Bible (NT and Psalms) was false.  It had said it would be published at the end of November, but I received an email from Amazon letting me know that they had cancelled the order.  Of course, this is all likely due to Amazon getting incorrect info on the date of publication, which according to Darton, Longman, & Todd will be January 2018.  The full bible is expected to be published later in the year.  We shall see.

If you missed it the first time, here is the description from the publisher: