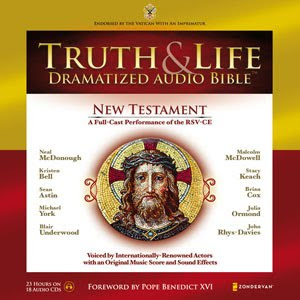 Well, this is not so much going to be a review, but rather some of my thoughts on this fine product. As mentioned in previous posts, the Truth & Life Dramatized Audio Bible is an exciting development for Catholic Bible readers (and listeners). I believe this is the first dramatized audio Bible that utilizes a Catholic edition of the Bible. The RSV-CE is the translation used, and I must say that even though the translation is 40+ years old, it still sounds both contemporary (for the most part) and elegant.

The audio CD's are packaged in three separate "digipaks" which contain six CD's each. Each of them contains photos from the project, as well as a foreword on the Word of God from Pope Benedict XVI, a letter from the producer Carl Amari, and additional information about the cast and producers. All in all, it has a professional look to it, which is something that doesn't always accompany Catholic Bible products.

Now onto the audio Bible itself. At this point, I can say that I have listened to all of the Gospel according to John, as well as snippets from the other Gospels and some of the letters. As I was listening to the Gospel of John, narrated by Stacy Keach, I tried to compare this audio Bible with other audio Bibles I own, most notably portions of The Word of Promise and the The Bible Experience: New Testament. The first thing that comes to mind is that in comparison to the other two audio Bibles, this one is a little more scaled back in the use of background sounds. However, I think this is a benefit to the whole listening experience. While there is certainly background noise and sound that accompanies the actors performances, it is not as pronounced as in the other two, IMHO. In a way, by not over-producing these "environmental" sounds, with dominating crowd noise or the sounds of nature, the focus remains on the Sacred Word being read. Again, it just adds enough to help the listener use his or her imagination to construct the scene in their mind as they listen.

The second aspect of this audio Bible that I would like to point out is the voice acting. One thing to note is that while the other two audio Bibles I mentioned had celebrities playing the roles of almost all the characters, the Truth & Life audio Bible has around eleven fairly well known actors playing the main, starring roles, while the others are handled by supporting or voice actors. For me, this was actually a good thing, since I wasn't always distracted by trying to figure out who is saying what. Overall, I found the acting, thus far, to be quite good. Jesus is played by actor Neal McDonough, who does a nice job overall. In particular, I found the readings done by Micheal York, Julia Ormond, and John Rhys-Davies to be my favorites.

Ultimately, I found this product to be quite beautiful to listen to. I can see myself using these, not only for personal use, but also in future Scripture classes at the high school, particularly the letters of St. Paul. I found my copy at Barnes and Noble and paid a little under $30.00, so it can certainly be found at a great price. It is also great to support Catholic products like this. No date has been set, but there are plans to do an Old Testament edition in the future.
Posted by Timothy at 9:36 AM

At about 28 minutes into the video at http://insightscoop.typepad.com/2004/2010/11/george-weigel-on-ewtns-the-world-over.html , there is an interview with Stacy Keach about this project. He has some interesting comments about Neal McDonough, who seems to be following in the footsteps of Patrick McGoohan in turning down roles on moral objections. (McGoohan, famous for his portrayal of Number 6 on "The Prisoner", refused to play James Bond.)

Timothy, I agree with everything you wrote in your review. I also plan on using these CDs in my RCIA class and my Bible Study class. This really is a good product.

Made the purchase at their web site and downloaded the mp3 files. Was waiting for iTunes but there was no point in waiting. These can be played on any device and for 25$ was a deal. I liked the Word of Promise audio bible but this right now seems so much better.

Off topic somewhat, in my blog, which usually deals in pop culture items, specifically the upcoming Captain Marvel movie, I have done my first post on Catholicism on the subject of Scripture and Liturgy. I hope you and all your readers will take an opportunity to check it out, and please feel free to leave comments. Thanks.