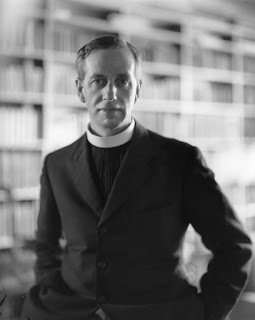 "And now it happened that he was going into a city called Naim, attended by his disciples and by a great multitude of people. And just as he drew near the gate of the city, a dead man was being carried out to his burial; the only son of his mother, and she was a widow; and a crowd of folk from the city went with her. When the Lord saw her, he had pity on her, and said, Do not weep. Then he went up and put his hand on the bier; and those who were carrying it stood still. And he said, Young man, I say to thee, rise up. And the dead man sat up, and spoke; and Jesus gave him back to his mother. They were all overcome with awe, and said, praising God, A great prophet has risen up among us; God has visited his people. And this story of him was noised abroad throughout the whole of Judaea and all the country round."

NAB:
"Jesus journeyed to a city called Nain, and his disciples and a large crowd accompanied him. As he drew near to the gate of the city, a man who had died was being carried out, the only son of his mother, and she was a widow. A large crowd from the city was with her. When the Lord saw her, he was moved with pity for her and said to her, “Do not weep.” He stepped forward and touched the coffin; at this the bearers halted, and he said, “Young man, I tell you, arise!” The dead man sat up and began to speak, and Jesus gave him to his mother. Fear seized them all, and they glorified God, exclaiming, “A great prophet has arisen in our midst, ” and “God has visited his people.” This report about him spread through the whole of Judea and in all the surrounding region."

NAB Note:
* [7:11–17] In the previous incident Jesus’ power was displayed for a Gentile whose servant was dying; in this episode it is displayed toward a widowed mother whose only son has already died. Jesus’ power over death prepares for his reply to John’s disciples in Lk 7:22: “the dead are raised.” This resuscitation in alluding to the prophet Elijah’s resurrection of the only son of a widow of Zarephath (1 Kgs 7:8–24) leads to the reaction of the crowd: “A great prophet has arisen in our midst” (Lk 7:16).
Posted by Timothy at 12:00 AM