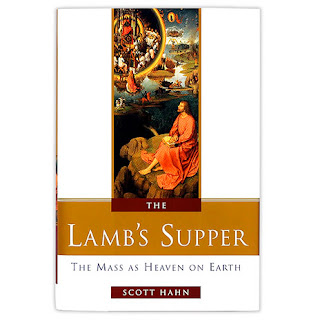 This review is not meant to be an all-encompassing analysis of the main points Dr. Hahn makes relating the Book of Revelation to the Mass, but rather a note of appreciation for a book that helped to move me in a new way into a greater love of Jesus, the Holy Mass, and the Holy Scriptures.  The Lamb's Supper: The Mass as Heaven on Earth is probably the most important book I read during a crucial time of transition in my life.  This book was published in 1999 during a time when I was really Catholic in name only.  Even though I had gone to Catholic high school and was attending Mass only a few times a month, I knew nothing of my faith and probably cared even less.  Yet the Lord began to slowly work in my life, or rather, I began to hear Him who had always been calling me to a greater relationship.  From 1999-2001 I was slowly, and I mean slowly, beginning to think about the ramifications about believing in what Christianity was all about.  At some point, I realized that if it were true, then I would have to make some tough decisions in life.  Because if all this stuff about Jesus rising from the dead and being Lord of the Universe was actually real and true, how could I go on living the life that I was currently living?

Somewhere around 2000 I began to attend Mass weekly, and slowly built up the curiosity to actually begin reading books about the faith.  Over the course of the next couple years or so, I would find myself spending  much of my free time reading Catholic books.  Some of the books I was reading were good, others OK, while others didn't really impact me at all.  At that point in my journey I really had no idea where to start, so I would just go to the local secular book store and find something that looked interesting in the "Catholic Section" to read.

Then, one day, I picked up the book The Lamb's Supper: The Mass as Heaven on Earth by Scott Hahn.  I read the dust jacket where it said "With its bizarre imagery, its mystic visions of Heaven, and its end-of-time prophecies, Revelation mirrors the sacrifice and celebration of the Eucharist" and I was hooked.  While I was attending Mass weekly at that point, I still hadn't quite figured it out yet, and often times found myself lapsing back into yawning at Mass, as I did as a child.  So the whole idea of learning how the Mass related to the ultra-mysterious Book of Revelation, which I wasn't quite yet ready to read for myself, seemed intriguing.

In the course of reading The Lamb's Supper I was introduced to two important elements of the faith that I had previously overlooked.  First, and foremost, the role that typology plays not only within the Bible itself, but also in interpretation.  In chapter two, Dr. Hahn goes over "The Story of Sacrifice" and focuses in on the phrase the "Lamb of God."  Now while I was at least familiar with that phrase from hearing it at Mass, I had never really taken the time to investigate why we said it.  In this chapter, Dr. Hahn begins by showing how often the phrase is used in the writings of John, then goes back to the Old Testament to show the connection with the Old Testament Temple sacrifices.  He writes: "We need to know what the Lamb is, and why we call Him 'Lamb.'  To find out, we have to go back in time, almost to the very beginning (16)."  That is indeed what he did and all I was left saying was "Wow!"  The thread that connects Abraham's sacrificing of Issac on Moriah to the Temple sacrifices at the Jerusalem Temple to the death of Jesus on Calvary made the scriptures come alive for me for the very first time in my life.  Truly, learning about typology made the Scriptures exciting!  This led me on to looking at other places where typology was important, like John 6.  I can honestly say that this "discovery" led me to where I am today, writing a Catholic Bible blog and teaching the Scriptures.

Secondly, Dr. Hahn introduced me to the early Church Fathers.  At that point, I had never really heard or read anything from them.  Sure, I had heard of people like Augustine, but I had no idea that we possessed the writings of Christians as early as the late first and into the second century.  Chapter three of The Lamb's Supper is devoted to showing how the early Christians celebrated Mass.  As someone who majored in classical history, these early Church writings showed me that the earliest Christians celebrated the Mass in much the same way that we do today.  Sure, there were differences and some things had developed over the course of two thousand years, but the basic outline of the Eucharistic Liturgy remained amazingly consistent.  He shows how Justin Martyr's description of the Mass in the mid second century is still seen today in its basic outline at every Mass celebrated in a Catholic church.  Even many of the words, although spoken in different languages, are remarkably similar as well (37-38).  The reality that the Mass was now something that connected me to the past was an eye opener.  Knowing that I celebrate the Mass in the same way that my ancestors did, along with those in heaven, made me approach my participation in Mass in a completely new way.  And boy, did I never realize how soaked the Mass is in the words and imagery of the Holy Bible. I am sure many of you have known this for a long time, but for me it was like discovering gold in my own back yard.

The rest of the book focused on the Book of Revelation with its many symbols and images.  He shows how these symbols were understood by the early Christian in a liturgical sense, and not only in an apocalyptic sense, so often distorted by TV preachers.  In his conclusion to the chapter on the early Church, Hahn writes: "Keep all of this in mind: the sounds and silences of the Church's first Masses.  You'll encounter them again in heaven, when we examine the Book of Revelation more closely.  You'll encounter them again in heaven, when you go to Mass next Sunday (39)."

In the end, this book set me on a course to buying more books and tapes that Dr. Hahn had produced, as well as other good Catholic biblical scholars.  More importantly, however, it helped to spark a deep love for reading the Holy Scriptures and Holy Mass.  For the first time in my life, the Bible became a living word which began to impact my life on a daily basis.  From that point on, I couldn't get enough of reading the Scriptures and listening to audio Bible studies.  I also became attracted to going to Mass not only on Sundays, but during the rest of the week.  This book is written for a general audience, so I would recommend it to anyone of high school age and over.  To read an extended excerpt, you can follow this link.


Thank you to Image Books for providing me a review copy
Posted by Timothy at 7:39 AM

Thanks for that testimony, brother.