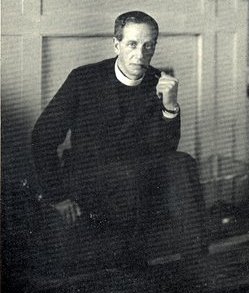 Via The Tablet.  Thanks reader John for alerting me to this talk given by Fr. Ashley Beck back in May.  This is only an excerpt from the talk, the full version is not yet available as far as I know.


"Evelyn Waugh remarks somewhere that in the face of ecclesiastical authority Knox became something of a schoolboy again in the presence of a prefect. This is seen also in relation to his translation of the Bible. While he had been fluent in Greek since childhood, he taught himself Hebrew when he began the work; while he is adamant that the work makes no claims for excellence in biblical scholarship, he was enough of a scholar to want to be aware of nuances in translation - not simply in rendering Jerome's Latin into English, but in understanding Jerome's own work of translation from the original languages - and of textual variants. Consequently the introductions and footnotes in the Knox Bible are important and carefully crafted, like everything else he wrote, and so is the commentary he wrote on the New Testament in 1955. At the same time in the long process of having his text approved by ‘experts' he seems largely to have accepted the suggestions made by others. It is interesting that in some of the works about the Bible which he published after his translation had appeared, he did so alongside a biblical scholar, a Vincentian priest from New Zealand, the confusingly named Fr Ronald Cox - whose pontifical degrees (STL, LSS) are displayed on the frontispieces, as if to give the books academic respectability.
Both in relation to theology in general and biblical studies there are perhaps two overall reasons for his reticence. The first is that by and large Knox wrote for laypeople rather than clergy[i], and in Catholic England during his lifetime theology was almost exclusively a clerical discipline. Laypeople who engaged in theological writing of a ‘professional' or academic kind in this period were viewed with a certain amount of reserve: devotional writing for and by laypeople was very different, and prolific[ii]. Not only that, but Knox's shyness and social background, and the work he did as a Catholic priest, meant that he had comparatively few friends and associates among Catholic priests, far less theologians[iii]. The social and intellectual world which he inhabited was not the same. Evelyn Waugh suggests that one can detect this distance in the painful correspondence Knox had with some bishops over his translation of the Bible and his proposed revision of the Manual of Church Prayers in the war years.
Secondly, both for theology in general and for biblical studies the years of Knox's prime, from the twenties to the early fifties, were arguably in England rather an arid period characterised by caution and fear. In his early writings as an Anglican Knox had mercilessly mocked and poured scorn on the Anglican counterparts of the ‘modernists' and as a Catholic would have little sympathy for the likes of Tyrell and Von Hügel: but the fallout from St Pius X's campaign against them did not sustain an atmosphere conducive to speculative or original theological study. The great turning-point in Catholic biblical studies, the publication of Pius XII's encyclical Divino Afflante Spiritu in 1943 came after Knox's great work on the Bible had got well underway."
Posted by Timothy at 12:00 AM