Consuming the Word Chapter 2: Before the Book 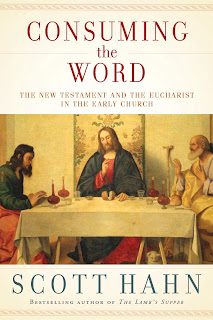 The first term than Hahn examines is one we are well familiar with, the "New Testament."  As he points out, it is "indeed a foundational term (9)."  Yet, when asked, most Christians would point to the twenty-seven books of the Christian Bible to describe what is the New Testament. Thus for most, if not all, it is a title of a book.

Hahn points out, however, that we don't find the term "New Testament" used to describe this collection of books until the very end of the second century (10).  Even into the third century, there was still some discussion as to which books belonged in the "New Testament."  Yet, the early Christian's belief system was based on a "New Testament," but it wasn't a book.

Now this does not mean that the early Christians didn't reverence the Scriptures, that is something that Hahn is not suggesting at all.  He spends the rest of chapter 2 showing how the early Christians "treated as sacred, and thus inviolable" the Scriptures from a very early date (14).   It seems the Hahn, who could have moved immediately on to explaining what the earliest Christians did mean by the term "New Testament," instead chose to spend a few pages reassuring his, perhaps Protestant, readers that the Church of the first four centuries honored and reverenced the Sacred writings, both old and new.  He spends a little bit of time looking at the term "canon" and showing that the even some first century Christians, as seen in 2 Peter, already considered some of the Apostolic writings as sacred.

To see what the term "New Testament" really meant to first or second century Christians, we will have to wait until chapter 3.  "If we seek to understand the vocabulary of our faith as the early Christians understood it, we must be willing to be surprised (16)."

Personal interest point: p.13 "...the Gospels' historical character as eyewitness documents...". Critical stuff with regard to our evangelizing non-believers. The undisputed genre is history/documentary with an intent of the authors (human and Devine) to impart fact (Luke is explicit). See also http://www.amazon.com/gp/aw/d/0802863906/ref=mp_s_a_1_2?qid=1371787165&sr=8-2&pi=SL75