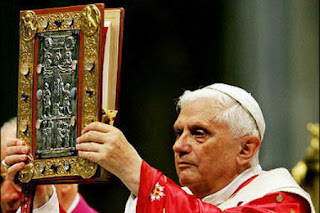 Let's continue on, as we do every Monday, with a short passage from the Post-Synodal Apostolic Exhortation Verbum Domini from Pope Benedict:

"While the Christ event is at the heart of divine revelation, we also need to realize that creation itself, the liber naturae, is an essential part of this symphony of many voices in which the one word is spoken. We also profess our faith that God has spoken his word in salvation history; he has made his voice heard; by the power of his Spirit “he has spoken through the prophets”. God’s word is thus spoken throughout the history of salvation, and most fully in the mystery of the incarnation, death and resurrection of the Son of God. Then too, the word of God is that word preached by the Apostles in obedience to the command of the Risen Jesus: “Go into all the world and preach the Gospel to the whole creation” (Mk 16:15). The word of God is thus handed on in the Church’s living Tradition. Finally, the word of God, attested and divinely inspired, is sacred Scripture, the Old and New Testaments. All this helps us to see that, while in the Church we greatly venerate the sacred Scriptures, the Christian faith is not a “religion of the book”: Christianity is the “religion of the word of God”, not of “a written and mute word, but of the incarnate and living Word”. Consequently the Scripture is to be proclaimed, heard, read, received and experienced as the word of God, in the stream of the apostolic Tradition from which it is inseparable."(7)
Posted by Timothy at 7:25 AM

Email ThisBlogThis!Share to TwitterShare to FacebookShare to Pinterest
Labels: B16, Verbum Domini

This is something I love about Catholicism and Orthodoxy - to see God's Word active in a broad dynamic way and not solely confined to the written Scriptures (though of course they hold prid eof place). When I engage in discussions with my Protestant friends there seems to be a real "short changing" going on and their fatih formation cannot seem to open their understanding to grasp this broader picture of nature, history, liturgy, etc. as conveying this one Word.