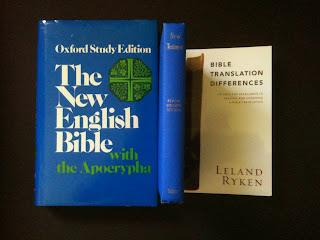 Nice finds. I have the NEB Study edition and also my personal favorite, the NEB in genuine maroon leather personal size edition, ribbon, family record pages, etc. I enjoy using NEB to get a different sense of things and have been told it is still one of the best translations of Paul.

I have a compact (7 1/4 x 5 1/4) NEB from Cambridge in French morocco leather in excellent condition that I picked up at a used bookstore for $8.50 But I like many of the changes made to the NEB in its revision, the REB.

Rolf - I picked up an REB and have to say that overall I didn't like it. Butmy reasoning maybe unique to me - what I find helpful in the NEB is such a different translation that it makes me stop andthe way other translations. I guess its a personal device I use to help keep the Word of God fresh as I often become so used to the passages that i can rush through them, etc. IF I could find and REB in a carryable nicely bund size I would probably pick it up. However, I usualyl only find it in the oxford Study Edition or a larger hardbound edition without any notes.

uggh I suck at keyboards... left out some words above in what I find helful in the NEB. So it should read:

...whatI find helpful in the NEB is such a different translation that it makes me stop and compare it to the way other translation put things...

I have two REBs, I have the Oxford Study Bible version and a Cambridge readers edition in the French Morocco Leather. The leather version is a nice medium size Bible (8 3/4 x 5 3/4) and comes with a slip cover which protects it and makes easy to take places. When I am reading a whole book of the Bible over one or a couple of days, I haven't found another translation that reads as smoothly. If I am planning on doing any scripture study then I can switch over to my RSV-2CE. But I enjoy reading both of them.

Out of curiosity, does the NEB have an Imprimatur or other official status in the Catholic Church? And how are the Psalms? I am looking for a beautifully rendered poetic translation of the Psalms.

I believe the NEB had Catholic participation. I am not sure on any official imprimatur however. The NEB, like the Jerusalem Bible, is known for being a more literary/dynamic translation. Here are a few verses from the NEB Psalms that I could find online:

Psalm 33:12 Happy is the nation whose God is the LORD, the people he has chosen for his own possession. (NEB)

Psalm 36:9 For with thee is the fountain of life, and in thy light we are bathed with light. (NEB)

Psalm 146:7 The LORD feeds the hungry and sets the prisoner free. (NEB)

Even though I am a more contemporary person, I like how the NEB retained Thee and THOU in praying to GOD in the Old Testament. I like the freshness of the NT tranlsations (mostly, nothing is ever 100%). The reason I first got the NEB was because when I reverted to Catholicism in 1978 in college I heard a talk by Venerable Archbishop Sheen and he thought it ot be the best of (the then available) English translations. I have read that Catholics particpated in the NEB and official Catholic laison was present for its successor, the Revised English Bible (REB) of which I am not a huge fan. I have also heard there are some vwery very few quirky phrases in the OT that have double meanings in American English. Not sure about that though.

From the "Preface to the New English Bible" in the Oxford Study Bible: NEB:

I think it is safe to say that while the NEB is not a Catholic Bible, it had support (and even official sponsorship) from Catholic Churches in Ireland and the UK.

The NEB is a rather unique translation that often took unusual interpretations of particular passages. It is great fun to look at the original texts and puzzle out why the translators made the decisions that they did. However, I find it too idiosyncratic to rely on.

I must also say that the NEB is rather uneven (this was T. S. Eliot's point in his famous skewering of the NEB) and reads poorly (a point admitted in the preface to the later REB edition).

The NEB is in print in two editions that I am aware of: one from the Bible Society and the "Library Edition" from Cambridge University Press (Old Testament, New Testament). Neither of these in-print editions have the Apocrypha/Deuterocanon, so you are better searching the used market.

The Bible Society edition has illustrations (!) and also has an unusual feature: some passages in the Old Testament are printed in smaller print (indicating, perhaps, that they can be skipped in a first reading). It is quite compact, and compares favorably to many "slimline" Bibles. And, the Catholic Church sponsorship of NEB is explicitly mentioned on the page across from the title page.

The Cambridge in-print volumes is a print-on-demand reissue set designed to match up with the newly re-issued Cambridge Bible Commentary series based on the NEB. Like the hardcover originals, it is a multivolume set with elegant (single column) typesetting printed on ordinary paper (not super-thin Bible paper). If you can find the original hardcover Cambridge "Library Edition" volumes then you should definitely consider buying them -- they are spectacular.

However, since the in-print volumes lack the Deuterocanon and are somewhat expensive, you are better served by looking for used editions. Both Cambridge and Oxford published single volume NEBs (and multi-volume) NEBs, and one of the nicest is the Oxford Study Bible mentioned by Timothy in his post. These are getting a little hard to find in fine or near-fine condition. I would avoid paperback editions -- these are almost always falling apart by now.

The NEB is a bit of a paradox; on the one hand, it was in fact important to Biblical scholarship in the mid-century and it certainly has interesting renderings. On the other hand, it was a failure: the REB reverted away from most of the NEB's innovations, and subsequently, even the REB has largely been abandoned in the United Kingdom. The NEB is one of those Bibles that seems to find use mainly in libraries of those scholars interested in English Bible translation or in making eclectic editions.

The NEB is a must for connoisseurs, but rather unimportant for most people.

When the RSV was revised to its second edition, the editors adopted many (but not all) of the changes suggested in the RSV-CE. However, they made many more changes as well. One of my complaints with the RSV-CE is that the CE editors never went back and integrated the many other improvements made to the text. For this reason among others, I find the RSV Oxford Annotated Bible, Expanded Edition superior to RSV-CE editions

By the way: an interesting tidbit -- the editor of the Oxford Study Bible: NEB was Rabbi Samuel Sandmel (who was an authority on New Testament and taught at Yale and Hebrew Union College). I believe this may be the first major ecumenical study Bible of our time edited by a Jewish scholar.

The list of contributors include a wide variety of Catholic, Jewish, and Protestant experts.

Where did you find them?

Amazon used has several NEBs with apocrypha and a decent price. I know that T. S. Elliot wasn;t a fan of the NEB translation but others in the literary world were fans, Walter Percy and Thomas Howard come to mind. I think they are quoted on the backcover of the paperback NEB Study Bible (Oxrford) that I have. I paid $30 for a genuine maroon morroco leather NEB with Apocrypha thru Amazon used and that was a rare find. It's NICE and though personal size (about 5x7) the font is clear, dark and very easy to read. My edition also come with a "Concse Reader's Guide" to terms, vocabulary, etc.

It is not very hard to find awkward verses in the NEB. For example, my original NEB OT has at Judges 1:14:

As she sat on the ass, she broke wind, and Caleb said, "What did you mean by that?" She replied, "I want to ask a favor of you."

In the Oxford Study Edition NEB this is slightly revised -- "she made a noise".

But obviously, with both versions, such an explicit mention to passing gas is unseemly (especially since we expect to see the traditional translation "dismounting from her donkey"). It gets worse when the translators use "ass" in the same verse. And then the odd "asking for a favor" just makes it hilariously vulgar.

When I read the NEB, I just see strange interpretation after strange interpretation (particularly in the translations from the Hebrew). I have seen people claim that the English in the NEB is elegant, but I don't see that at all. An unusually broad English vocabulary is used, but the authors seemed ignorant of ordinary features of English such as meter, stress, and euphony.

I can give you as many examples as you want of awkward renderings and interpretations that seem to have been chosen for their perversity.

Feel free to post more odd NEB renderings..... I find them amusing. Particularly since this is my first edition if the NEB.

I think that's the beauty of so many translations: something for every taste. i guess sometimes we get so attached to one way of saying something that we canonize it ourselves. I know I tend to be that way with certain passages.

Fulton J. Sheen was quite fond of the NEB. I have a copy of the Oxford study edition as well and I enjoy it quite a bit. A good comparison with other more traditional versions.