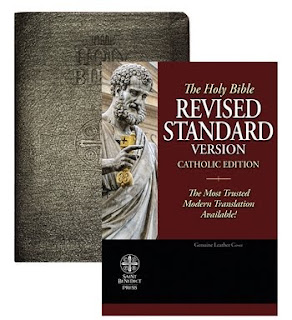 Over the past few weeks I have expressed some frustration with Saint Benedict Press with the delay in receiving their new RSV-CE. However, one of the managers read about my frustration, here and on another blog, and contacted me directly to resolve the problem. She was very nice and helpful, and assured me that this was an anomaly, which I certainly believe is the case. I look forward to ordering more books from Saint Benedict Press in the future.

The good news: I received the genuine leather RSV-CE yesterday in the mail.

The even better news: Outside of one major omission, this is a really fine edition of the RSV-CE.

So, where to begin?

Well, I would like to mention the most obvious upgrade is the page layout. It is by far the best page layout of any RSV-CE that I own. It is a very clear, clean text including bolded paragraph headings. It is very easy on the eyes to read. (Those who need a larger print can also purchase a large print edition in 12 point font.) The inside cover of this Bible mentions that it was published in association with HarperOne/HarperCollins, which brought to mind the page layouts of the recently released NRSV Catholic Gift Bible and Life With God Bible. All three of them are similar, which is a good thing. This is definitely superior to the older Ignatius/Scepter editions of the RSV-CE. Included, of course, are the original RSV-CE explanatory notes, which are placed as end notes at the back of each Testament.

Now onto the genuine leather cover. It is nice to finally be able to hold a Catholic edition of the RSV in a genuine leather cover. (Yes, I am aware of the RSV-CE from Oxford, but this Bible has so much more included in it, while not appearing like it was simply enlarged from a compact version of itself.) Now don't get me wrong, this is not a calfskin leather cover or anything, but it is a definite improvement upon the typical bonded leather editions of the RSV-CE or RSV-2CE. At first it is a little stiff, but I am certain this will improve after continued use. Those who are interested in a more softer cover, the synthetic leather/Italian duo-tone type covers can be purchased as well for this new RSV-CE. It also comes in paperback.

The fine people at Saint Benedict Press also included a number of extra features, which are typically lacking in most editions of the RSV-CE. These include: Presentation and Family Record pages, a section of New Testament maps, four full color pictures of artwork (I particularly like the El Greco Christ on the Cross), and a calendar of readings for the 3 Year Sunday Liturgical cycle as well as the weekday readings. Bravo! In addition, there is a ribbon marker included and the words of Christ are in red in the Gospels, which I don't care either way about, although I know some people who are passionately for or against this inclusion in Bibles.

So, overall, this is a very fine edition of the RSV-CE. There is, however, one fairly huge omission in my mind, which all of you who read this blog will know instantly what it is. There are no cross-references! D'oh! So close! I am not sure why the RSV-CE cross-references aren't included, perhaps it has something to do with the arrangement with HarperOne. The RSV-CE editions published in the past by Ignatius and Scepter, which are identical by the way, both included cross-references.

Let me just conclude this review by saying that this edition is very good overall. I like everything about it, except it's one major omission. It will certainly meet your needs for an every day RSV-CE reading Bible. I am sure it will make a great gift as well, particularly due to the beautiful presentation box that it comes in.

Below is a photo I took with my IPhone of the page layout. 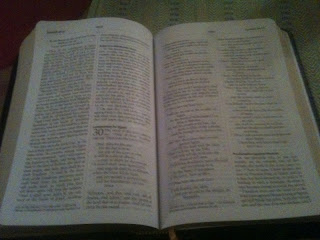 Could you post pictures of the inside text (prose and poetry)? Thanks! :)

I added a picture to the post from Ezekiel, which shows both some prose and poetry. Sorry that the photo isn't that great, but it should give you the overall look of the page layout.

Thanks for the photo. Looks like a good bible to buy. Bleedthrough seems to be moderate. Text looks easy on the eyes. Lack of cross-reference is a bit of a disappointment. I should email Saint Benedict to see if they can give an Advent/Christmas discount for it. :D

I once had a guy ask for a bible, then try to return it because, while it had the words of Jesus in red in the New Testament, they were missing in the Hebrew books. --sigh--

I think red-letter-Jesus is too much editing myself.

yeah, I tend to not like red-letter Bibles. It's not a deal breaker for me when purchasing a Bible, but sometimes by red-lettering only the words of Jesus there can be an implicit devaluing of the rest of the Bible.

Wow! Someone from the company contacted you directly about your shipment? I'm not sure if that is a sign that you have a really influential blog or that SBP is just a really small company. Whatever it is, that they would go out of their way to respond directly to your concerns is really exceptional customer service.

Yes! After a bit of a rocky start, they were exceedingly helpful and generous. I definitely recommed ordering from them. I certainly will again in the future.

Just put up my RSV review of this bible with a bunch of photos.

Your blog keeps getting better and better! Your older articles are not as good as newer ones you have a lot more creativity and originality now keep it up!

Genial post and this enter helped me alot in my college assignement. Gratefulness you for your information.

I purchased the RSV-CE from St. Benedict press and I am impressed by it. I wish St. Benedict Press would also release a leather NJB as well now that they have a leather RSV-CE, NAB and DR.

A minor point about "red-letter Jesus": I have an acquaintance who cannot read red-on-white because of an eye condition; apparently the problem then spills over to black characters and blurs them as well. Hearing about this made me understand that what I thought was simply an eyesore can actually be a real, serious handicap, especially if product descriptions are unclear at this point. Nowadays I am firmly against red letters as not only useless but actually harmful (to some).