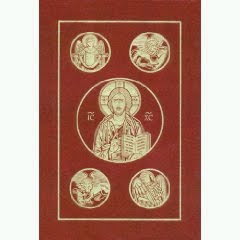 Over the weekend I had a few spare minutes and decided to count the number of changes between the RSV-CE and the RSV-2CE. Using the Emmaus Road Publishing Catholic Bible Concordance: Revised Standard Version: Catholic Edition, I came up with well over 2500 changes between the original and the updated. In all actuality, it may be closer to 2800, but I can't confirm that I always hit the right button on the computer when adding it all up. :) Safe to say, however, the number of changes are significant.
Keep in mind, this does not include the changes made to the archaic language in the original RSV-CE, like the "thees" and "thous". So, overall, that is a pretty hefty number in my book. Certainly worth giving the RSV-2CE a second look.
I wonder how this would compare to the ESV?
Update: A few years back a guy, mmortal03, on the Catholic Answers forums tabulated some of the changes in the new RSV-2CE. This was well before the Emmaus Road Catholic Bible Concordance was released and which documented all of the changes. However, his list remains helpful, in particular when comparing the RSV-2CE to the the original 1966 edition of the RSV-CE and the subsequent updates done by Oxford University Press. So check it out!
Posted by Timothy at 6:20 AM

One of the complaints that I heard about the ESV was that it exchanged the word 'tradition(s)' with the word 'teaching(s)' in Paul's letters. I have a 2004 large print ESV and it uses the word 'traditon(s)' in all of Paul's letters. I don't know if this was changed in later editions of the ESV, or is just a nasty rumor. Tim you have a new ESV with the deutrocanonical books, maybe you can check (2Thes 3:6, 2Thes 2:15, 1Cor 11:2, Gal 1:14).

I checked all 4 examples in the ESV with Apocrypha from Oxford and they all read "traditions".

Tim thanks for checking. I like the ESV and many of the changes that it made, but the RSV-2CE is approved by the Catholic Church for use in the Liturgy, it has the deutrocanonical books in their Catholic order. I like the fact that the RSV-2CE decided to keep some traditional Catholic wording such as: "Hail, full of grace", 'chalice' (instead of cup, which the revised Liturgy will also be using), the 'Our Father' prayer was left in the form that we recite it in Mass every Sunday. After all the Bible is not just another translated document, it is a book of the Church and should reflect her traditions. That is why I use many different translations for study, but the Bible that I pray with and use the most is the RSV-2CE.

I am slowly moving in that direction as well. It's starting to grow on me, and I never realized how many changes were made for the RSV-2CE. It certainly brings the overall language of the old RSV up to date.

But for me, the Bible I would want to use has to pass 6 checkpoints.

1- It must have "hail full of grace". RSV-CE has that, as does the liturgical NAB NT (though not as yet the NAB we can buy at a bookstore...hopefully that will change when the new NAB is published!)

3- It must have "gates of Hell". Both versions fail on that one.

4- It must have , in Luke 1:34, "how shall (or "will")this be done", not "can", which implies Mary doubted God (the same fault that caused Zechariah to become mute). Both fail on that.

5- It must have, in Matthew 16:26 (and its counterpart in Mark), "soul". Both versions fail, using "life" instead, downplaying the salvation of the soul.

6- it should have (though I would be more flexible on this one) "peace to men (or "those") of good will" rather than the weak favor rests/pleased.

So by my count, NAB gets a potential 2 points out of the 6, while the RSV-CE gets only 1.

The Challoner Douay-Rheims is still, sadly, the only Bible to meet my own personal requirements. I, myself, like the use of "thees" and "thous", as I think it makes scripture sound more prayerful, but some of the archane sentence structures of the CD-R are what make it tough to read at times. The Confraternity Version NT is, in my opinion, the closest version to perfect we have. It is just such a shame the OT was never completed and the NT is only available in tiny print pocket editions. Had the OT been completed, I know the RSV-CE would today have no following at all among Catholics. (And if only the Vatican would order the American bishops to have the entire NAB revised to be as close to the Confraternity NT as possible!)

While I enjoy the Confraternity NT, I think there is no way that it would have replaces the RSV. The main reason is the encyclical letter divino afflante spiritu by Pius xii which officially encouraged translations from the Greek and Hebrew.

Ultimately, I have spent the past 5 years trying to decide on what my favorite translation is, often with little success. I have come to see the positive and negative features in most translations. They all have them. In addition to the translation itself, I have also realized that another important factor is the bible edition. There are certain things I desire in a bible edition, like a quality leather cover, cross-references, readable typeset, and maps. Thus, the translation and the edition it comes in both are important.

I think most people can read profitably from the Confrafernity Bible, DR, NAB, NRSV, NJB, JB, or RSV. These days, I have been leaning towards the RSV-2CE. More news on that in the coming weeks.

I could be wrong, but I think the Confraternity NT used the orginal language texts as well as the Vulgate. I understand the importance of divino afflante spiritu, but I don't think it should exclude the vulgate. The RSV-2CE used the vulgate in it's revisions to a certain extent. As Thomas A. Nelson always says, St. Jerome used original language texts several centuries closer to when they were written, and could very well have been more reliable and accurate than the copies modern translaters use.

It would be great if the American bishops could get Vatican approved translators and editors to redo the NAB using the best original language texts and the vulgate, so that the English speaking world could have a version of the Bible that is beautiful and faithful, accurate and lyrical, that can be used in Liturgy without alterations from what you read at home. Is that too much to ask?

By the way, what is the English version the Vatican uses in its Liturgy? The RSV-CE or the Jerusalem Bible?

Wow, 2500 changes? At some point one has to consider whether or not it is still the RSV or a new version.

But usually new versions are put together by revision committees...

Yeah, I am not sure what translation they use. The NAB is on the Vatican website. However, when I have been in Rome the translation used at Mass depends on what church you go to, so St. Sylvester's uses the JB, while St. Susanna uses the NAB due to the national allegences of those individual Churches. As for an actual English language Mass at the Vatican, I guess that would depend on where the presider is from or the congregation.

Yeah, no kidding. Keep in mind that those changes do not even include the elimination of the archaic language. In many ways, the changes in the RSV-2CE is more extensive than Ignatius Press initially stated.

Do you have the leather cover edition of the RSV-2CE? I was reading some reviews of it on Amazon, and many were unhappy. They felt the leather covers were very cheap, with the gold icons coming off after minimal handling, and the binding was poor, as complaints of the pages coming loose very quickly were reported. Have you had any of these problems with it?

Funny you should bring that up. I agree with the lack of quality in the rsv-2ce bonded leather edition. That has been one of the main reasons why I haven't used it as much. But I have recently taken this problem into my own hands. I just sent out my bonded leather edition of the RSV-2ce to a company that re-covers/binds books in genuine calfskin leather. Once I get it back I will certainly post about it and the company I went with. Needless to say, I am pretty excited.

@Raphael - I have been a little perplexed at this experience from people. (Timothy's reaction too). The RSV-2CE Leather edition I have is pretty nice.

Maybe a printing after mine had a cheaper quality...the leather is the smoothest bonded leather I've even seen and it actually fooled me for a while. The binding is great and the gold on the cover is still perfect. I've had it for almost 2 years now.

Here is my review with pictures.

@Timothy - where did you send it? I use McSpadden and have had good results. I can't wait to see it when it comes back! Lots of pictures! Let's push the quality up a notch on our Catholic books.

I had a class with a seminarian who used the bonded leather rsv-2ce for a couple years and it was falling apart. I pretty much everything else about the Bible, although the lectionary readings would have been nice. So I decided to get a new cover through Leonards Book Restorations. And yes, there will definitely be lots of pics.

Cheers as well to the promotion of quality Bibles. To be honest, that is the main reason I started my blog!

Hi all!
Unfortunately,other than Oxford's 1990 catholic Study Bible NAB there has been no actual Leather bible printing by any non Protestant Publisher. I got over it some time ago and now use only High quality Protestant bibles.some with Apocrypha some without. The NASB is my favorite and it doesnt have the 'extra' books but that no longer matters to me as there is no essential doctrine taught in any of those books except maybe purgatory but even the eastern orthodox reject that and there bible has even more books that thr RCC. Best Regards, Jax

I don't think the orthodox reject purgatory, they put a different spin on it than we do.

I do not have any official stats, but I would think it would be less than the ESV. Both got rid of the archaic language, but the ESV was more thorough in other changes. They also have updated the ESV on two occasions since its first publication.