Raymond Brown's Introduction to the New Testament (Re-released and Abrdiged) 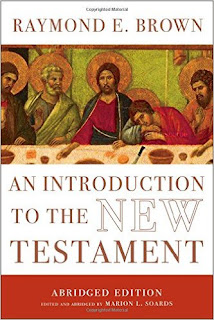 With that being said, I was happy to recently see that a new edition of Brown's work by Yale University Press.  This work has been edited and abridged for publication. The Amazon listing does provide a "Look Inside" if you want to compare it to the original edition.

Here is the description:

A long-awaited abridgement of Raymond Brown’s classic and best-selling introduction to the New TestamentSince its publication in 1997, Raymond Brown’s Introduction to the New Testament has been widely embraced by modern readers seeking to understand the Christian Bible. Acknowledged as a paragon of New Testament studies in his lifetime, Brown was a gifted communicator who wrote with ease and clarity. Abridged by Marion Soards, who worked with Brown on the original text, this new, concise version maintains the essence and centrist interpretation of the original without tampering with Brown’s perspective, insights, or conclusions. The biblical writings themselves remain the focus, but there are also chapters dealing with the nature, origin, and interpretation of the New Testament texts, as well as chapters concerning the political, social, religious, and philosophical world of antiquity. Furthermore, augmenting Brown’s commentary on the New Testament itself are topics such as the Gospels’ relationship to one another; the form and function of ancient letters; Paul’s thought and life, along with his motivation, legacy, and theology; a reflection on the historical Jesus; and a survey of relevant Jewish and Christian writings.  This comprehensive, reliable, and authoritative guidebook is now more accessible for novices, general readers, Bible study groups, ministers, scholars, and students alike.
Posted by Timothy at 8:19 AM

Tim,
This new edition was released on April 12, 2016.
And so it's available now in January 2017 and has been for 9 months
on both the Amazon website that you link to
and also directly from Yale University Press at
http://yalebooks.com/search/node/Introduction%20to%20the%20New%20Testament

Ah yes. :) I got thrown off because it isn't in stock currently! Very good. Thank you.

I just bought the original 1997 version and the new abridged version of 2016
which has some new stuff from the abridging author.
They are both IN STOCK at Yale University Press from whom I bought directly on their website about 15 minutes ago this morning.

I cannot imagine why anyone would want an 'abridged edition' of ANY book.

Well...maybe the novels of Victor Hugo, those could always use some judicious trimming, but that's about it.

I heard that Raymond Brown's introductory book shows a doubt on the perpetual virginity of Mary. Is this true?

He uses an intense and hardline historical critical method in his scholarship.

He is a favorite scholar of Islamic critics to prove Catholics dont believe the Bible is the Infallible Word of God and that the Gospel was corrupted....

Atheists are also huge fans of his scholarship.

So remember when reading his works, he was loved by atheists and Muslims, and opposed mostly by other Catholics and some conservative Protestants.

For Fr. Brown, the question of St. Matthew the Apostle being the author of the Gospel of Matthew is obvious - an obvious no.

It did and then it didn't. He was a master of a kind of theological doublespeak where he would present a long list of arguments why a particular Catholic doctrine was historically wrong, or why it couldn't be rationally defended or whatever, and then at the last second he would pull the rug out from everything he said and claim to affirm all of the doctrines that he seemed to be arguing against. The classic modernist ploy.

Fr. Brown had to do it like that, otherwise he would have been labelled a material heretic and his scholarship would've been censored.

I am not saying he was a horrible man, or that you shouldn't read his scholarship, or that I think he's in hell - I believe he was a good, holy, devout Priest. I believe his scholarship is good to read if you are up to it academically. I believe personally that he's either in heaven, or being purified and on his way to Heaven.

But I am just calling a spade a spade. His scholarship was NOT patristic, it was NOT traditional, not even in the least. And it was only orthodox in a very broad sense, it bordered on heterodox at every sentence, he was always on a tightrope with heresy to the left and apostasy to the right, but he was talented enough to walk that rope and never fall - at least not publicly.

I would recommend someone have a good sense and have read both the entire Bible and the entire Catechism, have been a solid Catholic for at least 5 years, have some knowledge of Patristic and Thomistic theology, have a good grounding in orthodox Catholic beliefs and traditions.... I would recommend one have all those criterion met before delving into Fr. Browns work, because Fr. Browns work is certainly capable of not only scandalizing someone's faith, but even helping them lose it entirely if they can't separate what's purely Fr. Browns scholarly guesswork and what's the traditions and Traditions of the Church.

I remember reading an interview with Fr. Brown back in the pre-internet days (1992) where he discussed how he could affirm doctrines like the Virgin Birth and the Trinity when his scholarship so effectively undercut the biblical basis for those doctrines. And his answer was: because he affirmed the infallibility of the Church. The Church was infallible and had defined those doctrines, therefore they were to be believed. I walked away from the article thinking, "his faith in the Church is what gives him the freedom to be such a strong historical-critical scholar." Later, as I was thinking more about the interview, it struck me that there was something else at work: the divorce of biblical studies from systematic theology. This is a major concern in modern Catholic theology (something Fr. Barron, for one, has commented on). At Vatican II teaches, the Bible is the "soul of the theology." Separating the Bible and what it teaches from what the Church teaches is quite wrong -- and if I was to point out the biggest concern I have with Fr. Brown's methodology as a Catholic scholar, it is that separation. Very bad idea.