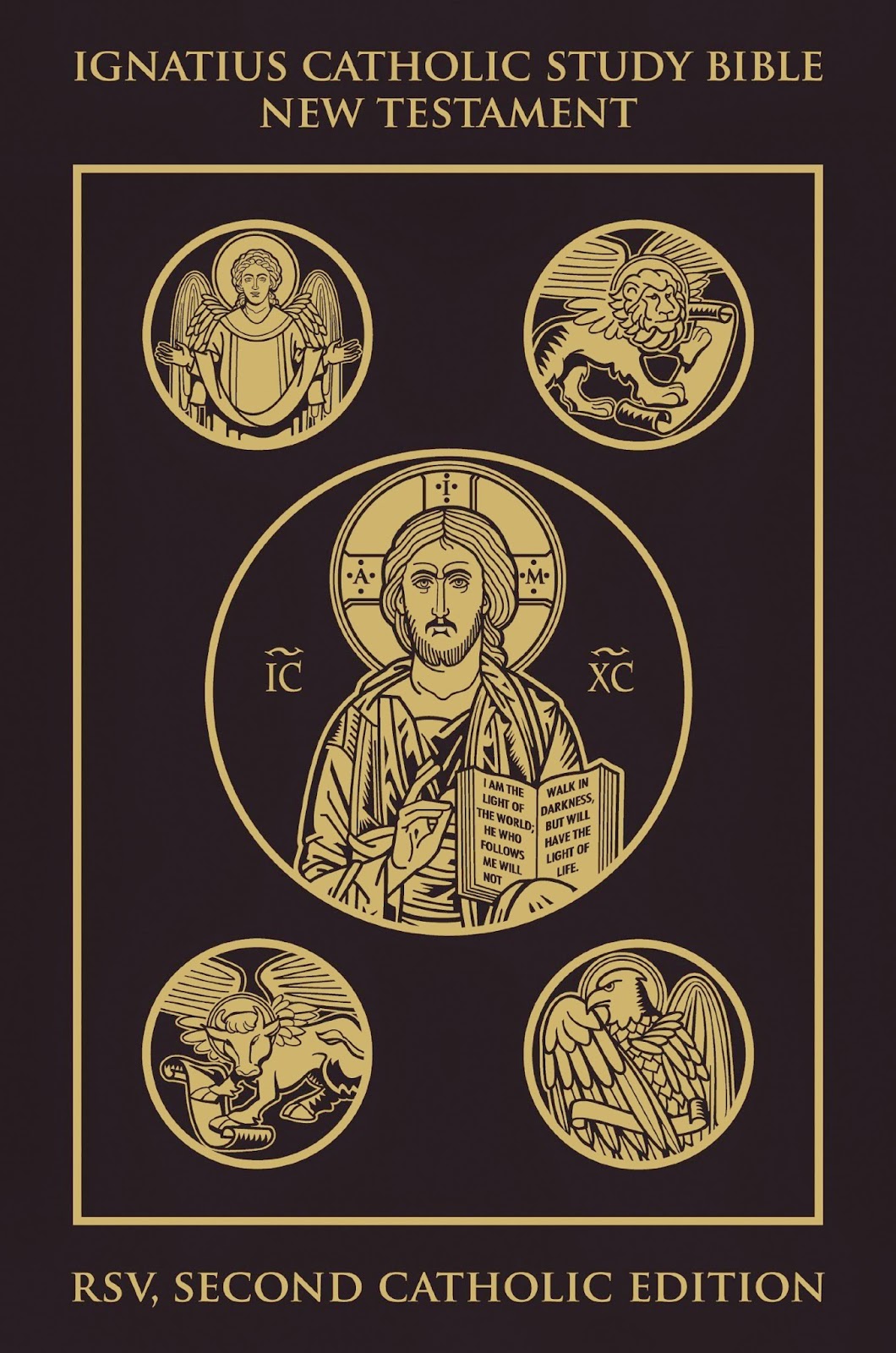 Thanks to reader Corey for including me in his email correspondence with Mark Brumley of Ignatius Press.

As you know I have been in communication with Mr. Mark Brumley at Ignatius Press about the forthcoming “complete” OT/NT Ignatius Catholic Study Bible.  In light of the size of the current single volume NT (Ignatius Press, 2010), I asked Mr. Brumley what the plans are at Ignatius regarding whether the final product with be a single or multi-volume “Bible”, publishing expectations, etc.

His response to my questions were as follows in two separate emails:

1.       Regarding single vs. multi-volume plans and material quality:

“Please know that the intention of Ignatius Press is that this work will be published as a single volume.  When the Old Testament is completed, the entire work of the Old and Testaments will be published on Bible paper, which is much thinner. The present New Testament annotated text is within the page count range for New Testament texts for Study Bibles. The Old Testament texts will be as well. In the end, we will have a single volume work that reflects the annotations, essays, and other elements of the Ignatius Catholic Study Bible pieces published in their individual formats. The work will also feature some additional elements.”

2.       Regarding expected publication date, with Mr. Brumley being very clear that the following should not be regarded as set-in-stone with respect to timeline:

“I am hoping we will have the published version of the complete, single volume Bible available by Fall of 2015 or Spring of 2016.  (That's my hope: Curtis Mitch may have another opinion; he's the one doing so much of the work at this point.)

We're finishing up the annotations for the balance of the OT--most of which should be done this year or early next, I think. Then we have to set the pages and compile everything. We may have to revise some of the existing books better to integrate the notes and cross references--we'll have to see. Also, Scott and Curtis may want to revisit items in the New Testament. Again, we'll have to see. We can't do too much revision of the New Testament, for all sorts of practical reasons, but we also don't need to so so, in my opinion.  The notes and commentary are simply outstanding as they are, if I do say so myself. (Since I didn't write them, I can say it!)  We'll be adding some more study Bible features and increasing the concordance a bit.

Email ThisBlogThis!Share to TwitterShare to FacebookShare to Pinterest
Labels: ICSB

Very good to hear Tim! I wonder if they will add the OT ICSB commentary to their app as it is finished as it seems what's in the app lags behind what Ignatius sells on their site.

Dare we hope that they will have, as an option, a genuine leather cover?

I have the Truth & Life version of the app and there are at least a couple of OT books already in there (genesis and exodus come to mind).

I was so hoping for an OT volume or two done similarly to the NT because it's nice to have a bible without paper thin pages (granted I think there needs to be the single volume normal style too!) that said, I've been finding myself using the bible app from Lighthouse Media that contains it more often than my print copy lately so? Is nice to have it always at hand on the phone.

A boy can dream....I just hope it has a more attractive cover than the one used for the annotatetd NT.

I can't wait to add it to my partial set I have in Verbum already.

So add a couple of extra years, because that's how these things tend to go and 2018!

This is awesome news! I have the Lighthouse app as well, and it does include Genesis, Exodus, Proverbs, Ecclesiastes, and Song of Solomon so far. Daniel and Job are also available as study booklets now.

I have a lot of study Bibles and Bible study resources, both on paper and electronic. Despite the fact the complete study Bible is not yet available, the RSV-2CE has become one of my all time favorite Bibles. It is simply a beautiful Catholic Bible, inside and out.

One note of interest for fans of the RSV-2CE: I recently got a new copy of the leather bound edition, and the Imprimatur and Nihil Obstat are now listed on the copyright page. On the last 3 editions that I am aware of it simply stated something about being published with Ecclesiastical or USCCB approval (the last time I bought one was 2011.) This is the original 1966 Imprimatur. I am wondering if some of those new elements the complete Study Bible will include will be a fresh Imprimatur and Introduction regarding translation. I think it is likely, but I will be happy either way!

If you ladies and gentlemen can smell the premium leather rebind from Leonard's of the forthcoming complete OT/NT ICSB, you should.

After all these years of reading different bibles, I like the old RSVCE published by Ignatius Press the best because it has the self-pronouncing feature.

I think the imprimatur/nihil obstat has been in printed copies of the RSV-2CE for a while. I ordered my paperback copy off Amazon a year ago. The back title page has them printed. They are from the 1960's. I have the RSV-2CE on my Nook and the imprimatur is not present; however, it is in the app. That's odd unless the USCCB (or whoever granted the imprimatur in the first place) treats digital Bibles differently from print.

I have the RSV-2CE (Lighthouse) app as well, for my android tablet. The approvals are listed under the "general" menu. Mine lists the 1966 imprimatur and nihil obstat, and below that is states that the 2nd edition is approved under the same imprimatur by the Secretariat for Doctrinal and Pastoral practices, National Conference of Catholic Bishops, February 29,2000. I am not sure if your copyright page is exactly the same as this, because I did upgrade to get the study notes.

I get the impression that Ignatius Press was not sure at first, how to most appropriatly express the approval given to the RSV-2CE. My observation has been thus: the older the paper edition, the less information it will contain than the app.

"“I am hoping we will have the published version of the complete, single volume Bible available by Fall of 2015 or Spring of 2016. (That's my hope: Curtis Mitch may have another opinion; he's the one doing so much of the work at this point.)"

LOL just looking back at these old comments that wish for the completion of the ICSB makes it laughable. I doubt it is going to be finished this year.
I hope I just jinxed it and that it really will be completed this year.

I have a new teenager that is asking for the complete bible and of course I would like to purchase it for myself too.... Love my NT Leather just want the OT too. Separate is ok just want NOW!!! Please give us an update on possible release dates??? Thanks, Susie in Wichita KS

Susie, I will let you know when Ignatius decides to let us know. :)

Sorry if this is a stupid question, but will you also have a seperate old testament version? I want to buy the NT version, but if there will be only a whole version and no OT only version, then it's weird..

Is there any updated info regarding goals or educated estimates as to the likely timing for the release of the complete (OT/NT) ICSB?

There have been none. Seems they keep pushing back the dates. Ignatius has not been very transparent on this, sad to say.

At least get an answer for us then ?

end of April 2017 now, any idea when we will see the Old Testament Ignatius Study Bible.

Unfortunately, I continue to hear nothing.

Still nothing, except for the individual volumes they continue to publish for the OT Books.

Please help me under stand if it is imprimatur and nihil

RSCV2ED current approval as in official approval! any word!!!

i posted the above comment, i should have been clearer, i am after any word on the official approval of the RSCV2CE, why is it assumed under the original imprimatur ?

Hello could you please remove my comments and try answer if you can.

it is 27th in Australia.