Benedict on Wednesday: Origen of Alexandria: The Thought (2) 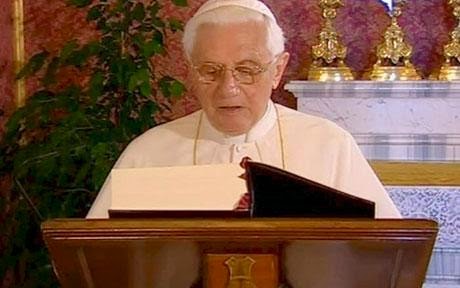 Last Wednesday's Catechesis was dedicated to the important figure of Origen, the second-to-third-century doctor of Alexandria. In that Catechesis, we examined the life and literary opus of the great Alexandrian teacher, identifying his threefold interpretation of the Bible as the life-giving nucleus of all his work. I set aside - to take them up today - two aspects of Origenian doctrine which I consider among the most important and timely: I intend to speak of his teachings on prayer and the Church. In fact, Origen - author of an important and ever timely treatise On Prayer - constantly interweaves his exegetical and theological writings with experiences and suggestions connected with prayer. Notwithstanding all the theological richness of his thought, his is never a purely academic approach; it is always founded on the experience of prayer, of contact with God. Indeed, to his mind, knowledge of the Scriptures requires prayer and intimacy with Christ even more than study. He was convinced that the best way to become acquainted with God is through love, and that there is no authentic scientia Christi without falling in love with him.

In his Letter to Gregory, Origen recommends: "Study first of all the lectio of the divine Scriptures. Study them, I say. For we need to study the divine writings deeply... and while you study these divine works with a believing and God-pleasing intention, knock at that which is closed in them and it shall be opened to you by the porter, of whom Jesus says, "To him the gatekeeper opens'.

"While you attend to this lectio divina, seek aright and with unwavering faith in God the hidden sense which is present in most passages of the divine Scriptures. And do not be content with knocking and seeking, for what is absolutely necessary for understanding divine things is oratio, and in urging us to this the Saviour says not only "knock and it will be opened to you', and "seek and you will find', but also "ask and it will be given you'" (Ep. Gr. 4).

The "primordial role" played by Origen in the history of lectio divina instantly flashes before one's eyes. Bishop Ambrose of Milan, who learned from Origen's works to interpret the Scriptures, later introduced them into the West to hand them on to Augustine and to the monastic tradition that followed.
As we have already said, according to Origen the highest degree of knowledge of God stems from love. Therefore, this also applies for human beings: only if there is love, if hearts are opened, can one person truly know the other.  Origen based his demonstration of this on a meaning that is sometimes attributed to the Hebrew verb to know, that is, when it is used to express the human act of love: "Adam knew Eve his wife, and she conceived" (Gn 4: 1).

This suggests that union in love procures the most authentic knowledge. Just as the man and the woman are "two in one flesh", so God and the believer become "two in one spirit".  The prayer of the Alexandrian thus attained the loftiest levels of mysticism, as is attested to by hisHomilies on the Song of Songs. A passage is presented in which Origen confessed: "I have often felt - God is my witness - that the Bridegroom came to me in the most exalted way. Then he suddenly left, and I was unable to find what I was seeking. Once again, I am taken by the desire for his coming and sometimes he returns, and when he has appeared to me, when I hold him with my hands, once again he flees from me, and when he has vanished I start again to seek him..." (Hom. in Cant. 1, 7).

I remember what my Venerable Predecessor wrote as an authentic witness in Novo Millennio Ineunte, where he showed the faithful "how prayer can progress, as a genuine dialogue of love, to the point of rendering the person wholly possessed by the divine Beloved, vibrating at the Spirit's touch, resting filially within the Father's heart".  "It is", John Paul II continues, "a journey totally sustained by grace, which nonetheless demands an intense spiritual commitment and is no stranger to painful purifications.... But it leads, in various possible ways, to the ineffable joy experienced by mystics as "nuptial union'" (n. 33).


Finally, we come to one of Origen's teachings on the Church, and precisely - within it - on the common priesthood of the faithful. In fact, as the Alexandrian affirms in his ninth Homily on Leviticus, "This discourse concerns us all" (Hom. in Lev. 9, 1). In the same Homily, Origen, referring to Aaron's prohibition, after the death of his two sons, from entering the Sancta sanctorum "at all times" (Lev 16: 2), thus warned the faithful: "This shows that if anyone were to enter the sanctuary at any time without being properly prepared and wearing priestly attire, without bringing the prescribed offerings and making himself favourable to God, he would die...."This discourse concerns us all. It requires us, in fact, to know how to accede to God's altar. Oh, do you not know that the priesthood has been conferred upon you too, that is, upon the entire Church of God and believing people? Listen to how Peter speaks to the faithful: "chosen race', he says, "royal, priestly, holy nation, people whom God has ransomed'.

"You therefore possess the priesthood because you are "a priestly race' and must thus offer the sacrifice to God.... But to offer it with dignity, you need garments that are pure and different from the common clothes of other men, and you need the divine fire" (ibid.).  Thus, on the one hand, "girded" and in "priestly attire" mean purity and honesty of life, and on the other, with the "lamp ever alight", that is, faith and knowledge of the Scriptures, we have the indispensable conditions for the exercise of the universal priesthood, which demands purity and an honest life, faith and knowledge of the Scriptures.  For the exercise of the ministerial priesthood, there is of course all the more reason why such conditions should be indispensable.

These conditions - a pure and virtuous life, but above all the acceptance and study of the Word - establish a true and proper "hierarchy of holiness" in the common priesthood of Christians. At the peak of this ascent of perfection, Origen places martyrdom.  Again, in his ninth Homily on Leviticus, he alludes to the "fire for the holocaust", that is, to faith and knowledge of the Scriptures which must never be extinguished on the altar of the person who exercises the priesthood.

He then adds: "But each one of us has within him" not only the fire; he "also has the holocaust and from his holocaust lights the altar so that it may burn for ever. If I renounce all my possessions, take up my cross and follow Christ, I offer my holocaust on the altar of God; and if I give up my body to be burned with love and achieve the glory of martyrdom, I offer my holocaust on the altar of God" (Hom. in Lev. 9, 9).  This tireless journey to perfection "concerns us all", in order that "the gaze of our hearts" may turn to contemplate Wisdom and Truth, which are Jesus Christ. Preaching on Jesus' discourse in Nazareth - when "the eyes of all in the synagogue were fixed on him" (cf. Lk 4: 16-30) - Origen seems to be addressing us: "Today, too, if you so wished, in this assembly your eyes can be fixed on the Saviour.  "In fact, it is when you turn the deepest gaze of your heart to the contemplation of Wisdom, Truth and the only Son of God that your eyes will see God. Happy the assembly of which Scripture attests that the eyes of all were fixed upon him!

"How I would like this assembly here to receive a similar testimony, and the eyes of all - the non-baptized and the faithful, women, men and children - to look at Jesus, not the eyes of the body but those of the soul!...
"Impress upon us the light of your face, O Lord, to whom be the power and the glory for ever and ever. Amen!" (Hom. in Lk 32: 6).
Posted by Timothy at 12:30 AM

Email ThisBlogThis!Share to TwitterShare to FacebookShare to Pinterest
Labels: Benedict on Wednesday