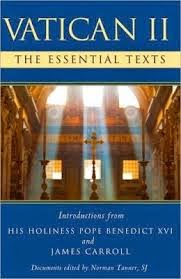 We are in the midst of commemorating the fifty years since the work of the Second Vatican Council.  There are a number of books that have been, and will be, published during this time which look back at the Council.  It goes withouth saying that Vatican II has had an impact on all Catholics.  For this blog, certainly the importance of Dei Verbum looms large.  I hope to spend some time blogging about it as we get closer to the its 50th anniversary in 2015.

One can, of course, find a whole assortment of books which analyze Vatican II.  Just do a search on Amazon and you will find dozens of books in English, representing vastly different perspectives.  Those of us of the post-Vatican II Church are fully aware of the interpretations and conflicts that are out there concerning the Council.  One of my great hopes with Pope Francis is that he can begin to bring some healing as the Church moves forward.  I think the dual canonizations of JXXIII and JPII was a very good idea in this regard.

One of the key terms for Vatican II was ressourcement, which meant a going back to the earlier sources.  In that spirit, I feel it is critical that those of us who are serious about the Church and her mission need to go back to the sources of the Second Vatican Council.  And how do we do that?  Well, we need to actually take the time to read the documents themselves, not only alone but also in study groups.  That is why I am excited to get a copy of Little Rock's Dei Verbum study, which comes out in June.  However, if you want to get a collection, in English, of the Council documents there are honestly not a lot of really good options.  The standard text that most of us are familiar with is the two volume work by Austin Flannery.  The problem is that it is massive and the production quality of the books are not very good.  The paper is cheap and the cover will not stand up to much use.  There is also the out of print edition by Abbotts and Gallagher, which is wonderfully compact, but again suffers from some of the same quality issues as the previous edition.  There was also a large volume published by Pauline which contains the sixteen documents, but it too is out of print.  So what do you do if you want a fairly nice looking, and feeling, collection of the documents of Vatican II which you can actually take around with you to read and pray over?  (And yes, I understand that you can print them off for free from the Vatican website.)

I would recommend Image's Vatican II: The Essential Texts edited by Norman Tanner, SJ.  This "essential" collection of Vatican II is a pleasure to read from and portable enough to tuck into your bag without taking up too much space.  This volume contains the Four Constitutions (Sacrosanctum Concilium, Dei Verbum, Lumen Gentium, and Gaudium et Spes) along with the Declarations on Religious Freedom (Dignitatis Humanae) and on the Church's Relation to Non-Christian Religions (Nostra Aetate).  Each of the documents come with a brief historical introduction by Edward Hahnenberg, which help to place their formation in their historical context.  (If anyone can recommend a fuller treatment of the history of the council, which doesn't follow the extreme positions taken by some on both sides, I'd appreciate it.)  The translation of the documents comes from a 1990 Sheed & Ward/Georgetown University Press publication, with minor edits by Norman Tanner.  The book's appendix contains all the notes that were included with the official documents, which are certainly a must for understanding the true intent of the Council Fathers.

The very first thing you will encounter in this volume are the "introductions" from Pope Benedict XVI and Boston Globe columnist James Carroll.  Without getting into specifics, these two share differing opinions on the Council.  Pope Benedict is of the school of seeing the Council through the hermeneutic of continuity with the past, while Carroll falls more in the hermeneutic of rupture/change.  I stand with Pope Benedict on this issue, so I don't find Carroll's comments all that convincing.  (It should be noted that both "introductions" consist in previous articles/speeches done by the authors.)  I am not, in general, a fan of Carroll's writings, however, I think having his essay included, along with Benedict's, shows the spectrum of interpretation that has existed during these past fifty years.

As with any volume that claims to be "essential," there are bound to be elements I would have liked to see included.  In particular, since this volume is directly primarily towards the lay faithful, I think they should have included the the Decree on the Apostolate of the Laity.  It would have really rounded out the other six, and plus when we think about the laity's role in the New Evangelization, it would be really helpful to have this document among the others.  Also, since Lumen Gentium and Nostra Aetate were included, I would have really liked to have seen Unitatis Redintegratio, the decree on Ecumenism, a part of this collection.

Overall, however, if you want an attractive and portable edition of the main Vatican II documents, this is the one to go with.  I highly recommend it.

Thank you to Katie at Image Books for providing me a review copy
Posted by Timothy at 12:00 AM

Nice review...I was looking at this book, but wasn't sure about it. Your review will def. make me look at it again and re-consider. Hope you and yours are doing well!

> to get a collection, in English, of the Council documents ...

For e-book readers: The "Catechism Collection" from Logos does include the Conucil documents -- https://verbum.com/catechism