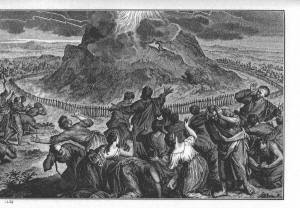 The most numerous and consistent change from the RSV-CE to the RSV-2CE concerns the use of the Hebrew word ben in the Old Testament. Used most often in the Pentateuch, this change occurs some 526 times in the RSV-2CE Old Testament.
A well-known example comes from Exodus 1:9, which the original RSV-CE translates: ""And he said to his people, "Behold, the people of Israel are too many and too mighty for us.""
In most Bibles, including the RSV-CE, KJV, Douay-Rheims, NAB and NRSV, the translators go with either "the people of the children of Israel" or "the children of Israel" or just simply "the Israelite people". The RSV-2CE revisers went with "the sons of Israel" consistently. The NASB comes closest to the RSV-2CE by translating this phrase "the people of the sons of Israel", which seems to be the most literal rendering of the Hebrew. I wonder why the RSV-2CE revisers didn't simply go with the NASB rendering?
Posted by Timothy at 6:39 AM

Could it be an over-reaction to what they see as the inclusive language of the NRSV?

A backlash that feels that "sons" more accurately describes the group than "children"?

The Hebrew uses ben as son, child (and especially children in the plural), but also as a genitive. Here are some examples from Waltke & O'Connor's Biblical Hebrew Syntax:

Ben is used to express membership in a class

Son is also the regular way to express age in Hebrew.

I think "sons of Israel" in this case (Ex 1:9) is an actual error. Children of Israel is the expression that has been used in English since the King James version, and "sons of Israel" is traditionally used to distinguish and refer to the 12 sons of Jacob/Israel.

In this passage, the new king says that there are too many Israelites -- the people of the group identified as Children of Israel. Joseph and his brothers are dead. The people are now more than simply the sons of Jacob/Israel.

I'm curious -- what does Ex 1:7 call them? does it say that the SONS were fruitful and increased? or the CHILDREN?

The RSV-2CE for Exodus 1:7 goes with the "descendants of Israel".

Meg has touched a little on the meaning behind this expression. It is actually related to how and why the Church began to recognize that Jesus Christ was the “Son of God” not in the case of an “offspring” but as the Incarnate Word.

The expression “children of the sons of Israel” means that the people being spoken of are those who have the right to inherit all the promises made to Israel. It could be paraphrased by simply saying the “heirs of Israel.”

As Meg expressed the word “son” in Semitic idiom does not always refer to a male offspring. It often means “equivalent to,” “the living embodiment of” or “of the class of.” For example, the “sons of the prophets” were not literally the male offspring of prophets. They were members of a group or guild of prophets, often a group following the teachings of one main prophet.—2 Kings 4:38; 6:1ff; 1 Samuel 10.

At John 17:12 Jesus tells God in prayer that none of those assigned to him have been lost “except for the son of destruction” or “perdition” in some translations. Referring to Judas Iscariot, Jesus is calling Judas the "embodiment of destruction" or "Mr. Perdition himself."

The title Jesus most often uses for himself is “Son of Man,” not merely because it is a Messianic title but because it means he is the equivalent of Adam or “the last Adam” and that he can take on the price for sin for all humanity as he is its “living embodiment.” (1 Corinthians 15:45) The blind man who calls out for Jesus to heal him publicly calls Jesus the “Son of David,” meaning that the blind man believes Jesus to be "the Messiah" who has the right to King David's throne. The people try to silence the blind man from doing this, knowing such a public declaration could cost him his standing in the synagogue, but Jesus rewards the blind man for showing such faith in him. (Luke 18:35-43) And of course, Jesus is called “Son of God,” not because he is a created offspring born of the Father, but because like the Father, Jesus too is one of the Persons of the Godhead.—John 5:18.

It is the same thing with the expression in question. It merely means that those spoken of are authentic children of Israel and as such have every right to inherit the promises made to Israel.

However, because English does not have this sense of “son,” it is often removed in most translations. Unless you know your Hebrew idioms, it sounds a bit clumsy and, in all truth, can take a away from rendering clearly to the common English-speaking Bible reader who usually knows that the Israelites are heirs to God’s promises without having to read an idiom expressing the same idea.

Another translation that uses "sons of Israel" is the Christian Community Bible:

Ex 1:7
"The sons of Israel were fruitful and kept increasing."

Ex 1:9
"and he said to his people, `The Israelites are more numerous and stronger than we are.'"

Thanks for the info on the CCB.