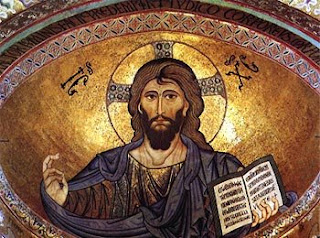 This short talk was given by Pope Benedict XVI on November 23, 2008 on the Feast of Christ the King. It took place during his usual Sunday Angelus:

Today, on this final Sunday of the liturgical year, the solemnity of Our Lord Jesus Christ, the King of the Universe. We know from the Gospels that Jesus refused the title of king when this was intended in a political sense, along the lines of the "kings of the nations" (cf Mt 20:24). Instead, during his passion, he took upon himself a singular regalness before Pilate, who asked him: "Are you a king?" and Jesus replied: "You say I am a king" (Jn 18:37); but shortly before this he declared: "my kingdom is not one of this world" (Jn 18:36). The royalty of Christ, in fact, is the revelation and accomplishment of God the Father, who governs all things with love and justice. The Father entrusted to his Son the mission of giving eternal life to man, loving him even unto the supreme sacrifice, and at the same time conferring on him the power of judgment, from the moment he became Son of man, like us in every way (Jn 5:21-22,26-27).

Today's Gospel insists upon the universal royalty of Christ the Judge, with the magnificent parable of the final judgment, which St Matthew placed immediately before his account of the Passion (25:31-46). The images are simple, the language is common, but the message is extremely important: it is the truth on our ultimate destiny and on the criteria with which we will be valued. "I was hungry and you gave me good, I was thirsty and you gave me to drink, I was a stranger and you welcomed me" (Mt 25:35) and so forth. Who isn't familiar with this? It's a part of our civilization. It's marked the story of the peoples of Christian culture: the hierarchy of values, institutions, the host of beneficial social works. In effect, the reign of Christ is not of this world, but brings to completion all the good that, thanks be to God, exists in man and in history. If we put into practice our love for our neighbor, according to the Gospel message, we then pave the way for the lordship of God, and his kingdom is realized by means of us. If instead each one thinks only of his own interests, the world can't help but go forward in ruins.

Dear friends, the kingdom of God is not a question of honors and appearances, but as St Paul writes, it is "justice, peace and joy in the Holy Spirit" (Rm 4:17). To the Lord takes our good to heart, that each man and woman might have life, and especially that his "smallest" of children might join in the banquet he has prepared for all. Thus he knows not what to make of those kind of hypocrites who say "Lord, Lord" and then transgress his commandments (cf Mt 7:21). In his eternal kingdom, God welcomes those who push themselves day after day to put into practice his word. For this the Virgin Mary, the humblest of all creatures, is the greatest in his eyes and sits as Queen at the right hand of Christ the King. To her heavenly intercession let us entrust ourselves again with a child's trust, that we might realize our Christian mission in the world.
Posted by Timothy at 7:38 AM