A Little Love for the NAB 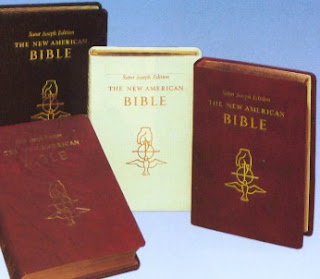 Over the past weekend, while I was attending the 2008 Letter and Spirit Conference, I decided that I may have been a bit too harsh on the NAB in the previous post. Why? Well, I was able to listen to a few lectures by some solid Catholic Bible scholars who at times referred to the NAB in their papers. So, it made me re-think the whole usefulness of the NAB. Are there still thinks about the NAB that I don't like? Yes! I still don't like the '91 Psalms at all and some of the verse numbering in the OT is odd.
However, I think the NAB New Testament is generally quite good. While it is slightly less "literal" than then RSV, it compares quite well to the NRSV, without the NRSV's excesses in inclusive language. Also, there are some translation decisions in the NAB NT that I think are quite good. Here are just three that come to mind immediately:
1) "I AM" sayings in the Gospels: John 13:19 "From now on I am telling you before it happens, so that when it happens you may believe that I AM."
2) Literal translation of "εξοδον" in Luke 9:31 "who appeared in glory and spoke of his exodus that he was going to accomplish in Jerusalem."
3) The "Amen, Amen" sayings: John 16:20 "Amen, amen, I say to you, you will weep and mourn, while the world rejoices; you will grieve, but your grief will become joy."
In addition, while I was at the conference, I was introduced to the first two volumes in the new Catholic Commentary on Sacred Scripture. This commentary series is edited by two professors at the seminary I attend, Dr. Peter Williamson and Dr. Mary Healy. They are both gifted teachers and have a wonderful ability to combine important exegetical information with pastoral concerns. So, I was very excited to purchase the new commentary series and was somewhat surprised to see that the main text used is the NAB. So, who knows, perhaps with a revised OT/Psalms, the NAB could become the standard Catholic Bible in the USA in the future. But until then, there will be plenty of people who prefer to use the RSV-CE.
Posted by Timothy at 8:09 AM

Email ThisBlogThis!Share to TwitterShare to FacebookShare to Pinterest
Labels: NAB

This new scripture series looks pretty good, I read some of the samples that they had online and it was quite refreshing. So much historical criticism in most commentaries can strip Bible stories of their religious teaching and leave a bare historical frame in its place. We must remember that the Bible is first and formost a religious book of the Church, not a historical book. This commentary series seems to be more devotional then most of the others, and very readable. And at $19.95 a book, a little more affordable (although you have to buy quite a few volumes to get the whole NT).

I highly recommend these new commentaries. I think they have the perfect balance of being scholarly and pastoral. Plus, they have some great Catholic Biblical scholars working on the individual volumes.

Since the U.S. Catholic Bishops are going to use the revised grail psalms in the Liturgy, they may as well put those psalms in the NAB (like the CTS Catholic Bible did in England)when the revised OT comes out. At least that way we would have a Bible that would be a little more representative of our Liturgy, and isn't that the whole purpose.

It would certainly be an upgrade for the NAB! I might even consider using it more.