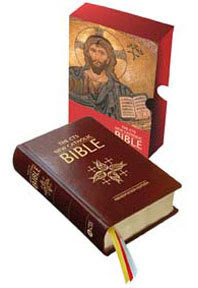 Well, here is something that recently was published in England. It is the CTS New Catholic Bible. For those of you in the English speaking Catholic world, outside the USA, this may be the Bible for you. It contains the original edition of the Jerusalem Bible, with the Grail Psalms inserted in place of the JB ones. Also, this new edition alters the divine name, YHWH, and has replaced it with the standard English use of LORD, in conjunction with Pope Benedict's recommendations. I commend the Catholic Truth Society for publishing this edition; it would be nice to see what the USCCB does in the future, since it adopted the Grail Psalms for the liturgy. Why not have a Bible that Catholics in American could use at Mass on Sunday and for private study and devotions? Seems like a no-brainer! It also comes in four different editions.
Below are some of the other features of the CTS New Catholic Bible:
-New specially commissioned introductions, one for each book, giving the biblical and historical context
-New specially commissioned liturgical introductions placing each book of the Bible in the Church’s liturgical year
-New footnotes following the latest scholarship
-New marginal references helping you get the most out of each passage.
-New layout – using clear and modern fonts in easy-to-read single-column format
-New text alterations, replacing the word ‘Yahweh’ with ‘the LORD’ as requested by Benedict XVI for all new Bibles
-New directories of references for readings used in the Mass and the Liturgy of the Hours, including the fuller two-year cycle for the Breviary.
Posted by Timothy at 9:44 AM

Ooooooooooooooooo, now that IS tempting!! Something to put on my Christmas list. :)

Particularly since some form of the Grail Psalms will be in use in the US Mass at some point.

What exactly is wrong with the JB Psalms?

I am not sure anything in particular. Its just that in England, the Grail Psalms are used at Mass.

I bought this Bible and I use it instead of my 3+ pound Jerusalem Bible. I bought the presentation Bible which is nice. It is pretty compact (7 3/4 " By 5") it is the size of a fat missal (it is 2" thick). It has a leather wrapped hardcover. The font size is about 8, but it is well spaced. It has very brief maps that are on the inside of each cover. It has brief and concise notes on the bottom of each page. There are introductions to each book with liturgical notes at the bottom. It has three ribbon markers. This is a nice size bible to take to Church or other functions, especially if you like the Jerusalem Bible. The cost was $58.00 (including shipping) a few months ago, the price will depend on the dollar/pound exchange rate.

Do you use it much?

Tim, I don't use it a lot. I rotate it around with other versions like the Christian Community Bible and the REB. My main two translations have been the RSV-2CE and the NAB. After reading that piece on the ESV on the BB Blog (which would include the RSV), I am concidering giving the REB a little more time.

I wish they had an edition like this for those of us in the U.S

I ran across the CTS New Catholic Bible during extensive online searches for a good Catholic study bible. My main bible had been the NOAB 2007 3rd edition and I bought this as a more 'pastoral' study bible.

I'll tell you what, I love them both! I can't say that the CTS is more 'pastoral', rather, it takes a slightly different view than the NOAB. Both are scholarly editions (both text and notes) and, in my opinion, present and treat the newest archaeological and biblical exigetics in an objective manner. I cannot tell you the number of times that the NOAB and CTS bible notes have corroborated (while further elaborating on) each other's thoughts. It is refreshing and gives one the sense of having a complete academic perspective on matters of faith.

I further enjoy the NOAB's use of inclusive language vs. the CTS non-inclusive approach. Though, this one issue presents great ajada for Catholic bible students on both sides of the issue, I have found it to be a non-issue. Especially, when the NOAB NRSV notes religiously state what the alternate translation is -- and that almost always agrees word for word with the RSV and/or NAB. [I confess to rather detesting the NAB. It is sometimes a chore to ignore the overly clunky translations when just having to get through the LOTH readings for the day.]

I primarily use the CTS bible for reading lengthy passages while reclining because of the handy size while the NOAB is used as my primary desk bible. Both have proven to be illuminating (and pastoral - yes, even the NOAB!) for bible study.

In all, it is nice to see another American review of the CTS bible. Too bad you have to go through web gymnastics to acquire a copy here in the states. My standard hardcover edition was nearly $40 US with international shipping. It is a medium-good quality binding. My only issue was that the binding adhesive was smeared across the top of the book, thereby requiring me to often peel the pages apart. A few tears ensued. Not the worst problem to have.

By the way, I'm a fan of hardcover bibles across the board. I don't like bible covers because they get in my way and the hardcovers always stand up to a lot of abuse and end up aging gracefully.

Thank you for this blog, I've had fun reading your evaluations!

Thanks for stopping by!

Hello. I just ordered this book and was wondering if anyone can answer what sort of binding it has? I mean sewn or glued. Id like to get this rebinded in a goatskin leather. If its a glued binding I may just leave well enough alone...

I plan to get one. I wish they hadn't edited God's various names. The Holy Father only said we should not use them during public worship. He did not say it was wrong during private study. I love the original 1966 Jerusalem Bible with all the wonderful names for God.

I especially like the format and font set of this Bible which when compared to my 1966 Jerusalem Bible is the same size with a new easier to read font. This bible keeps to the single column format as the 1966 Jerusalem Bible with notation printed at the bottom of each page with a full summary at the beginning of each book of the bible.

The perfect Bible edition for me! :D