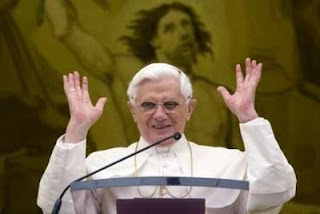 Being the year of St. Paul, Pope Benedict has devoted many of his public talks to the Apostle. At today's weekly audience, he spoke on St. Paul and justification. I particularly like the definition he gives, based on Paul, of what faith is: "Faith is looking at Christ, trusting in Christ ... conforming to Christ." Thanks to the Vatican Information Service for the article:

VATICAN CITY, 19 NOV 2008 (VIS) "Continuing his series of lessons on St. Paul, Benedict XVI dedicated his general audience, held in St. Peter's Square this morning, to the "question of justification. How do human beings make themselves just in the eyes of God?" This question that occupies a central place in the Apostle's Letters.
When Paul met the Risen One on the road to Damascus, said the Pope, "he was a successful man: blameless as to righteousness under the Law". Yet "the conversion of Damascus radically changed his life, and he began to consider all the gains of his irreprehensible religious career as 'rubbish' in the face of the sublimity of his knowledge of Jesus Christ.
"The Letter to the Philippians", he added, "provides moving testimony of Paul's shift from a justice founded on the Law and achieved by observing certain prescribed actions, to a justice based upon faith in Jesus Christ. ... It is because of this personal experience of the relationship with Jesus Christ that Paul focuses his Gospel on a steadfast contrast between two alternative paths to justice: one based on the works of the Law, the other founded on the grace of faith in Christ".
Thus St. Paul "reaffirms to the Christians of Rome that 'all have sinned and fall short of the glory of God; they are now justified by His grace as a gift through the redemption that is in Christ Jesus', and the Apostle adds that 'we hold that a person is justified by faith apart from works prescribed by the Law'".
"Luther", said the Pope, "translated this as 'justified by faith alone', ... yet before returning to this point it is necessary to clarify which is the 'Law' from which we have been freed and what are the works that do not justify us. In the community of Corinth there already existed an opinion, that crops up again throughout history, to the effect that it is the moral law, and that hence Christian freedom means freedom from ethics. ... Obviously this is an incorrect interpretation. Christian freedom is not debauchery, ... it is not freedom from doing good".
"For St. Paul, as for his contemporaries, the word Law meant the Torah in its entirety, ... which imposed ... a series of actions ranging from an ethical core to ritual observances ... and substantially defined the identity of the just man, ... such as circumcision, dietary laws, etc. ... All these precepts - expressive of a social, cultural and religious identity - were very important" in the Hellenistic age when polytheism was rife and Israel felt threatened in its identity and feared "the loss of faith in the One God and in His promises".
For this reason it was necessary counteract Greek pressure with "a wall that protected the precious heritage of the faith. This wall was represented by the Jewish precepts". Yet Paul, after his encounter with Christ, understood that "the God of Israel, the only true God, has become the God of all peoples and the wall ... between Israel and the pagans is no longer necessary. Christ protects us from polytheism and its deviations. Christ guarantees our identity within the diversity of cultures, ... it is He Who makes us just".
"Being just simply means being with Christ, being in Christ, that is all. The other precepts are no longer necessary. ... For this reason Luther's 'sola fide' is true if it is not placed in opposition to charity, to love. Faith is looking at Christ, trusting in Christ ... conforming to Christ. And the form of Christ's life was love. ... We become just in communion with Christ Who is love. ... Justice is defined in charity".
"We can only pray to the Lord to help us believe", Benedict XVI concluded. "Thus belief becomes life, unity with Christ, transformation. ... And transformed by His love, by love for God and mankind, we will truly be just in the eyes of God". "
Posted by Timothy at 8:35 AM

Tim, I like his photo here. Benedict looks like a joyful man who is happy about what he's doing.

As I am sure you experience, recognizing the reality of Christ is a wonderful thing and the only real response is joy. I was in Rome during Christmas time 2 years ago, and I was able to go to the Vatican on a number of occasions to see Pope Benedict. One of the things I noticed immediately was his joy. I think you can get a small glimpse of that, not only in the various pictures of him, but perhaps most explicitly in his book "Jesus of Nazareth". It is a great book, which cannot be grasped in a single reading.