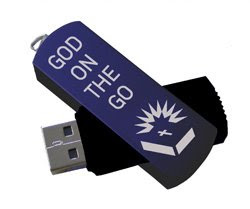 So, I received an email alerting me to a new product which ACTA Publications is selling. They are calling it the God on the Go flash drive. It comes in two different editions, one is the NAB New Testament (with notes) and the second is the NRSV (without Deuterocanonicals). I don't know much else about this product, but I thought I would let you know about its existence. There is additional information about the product's producer, Soul-Centered Enterprises, on its site. The site states: "We are proud of our affiliation with both the Archdiocese of Chicago and Mobile Gabriel." There is also a short video about the product which can be viewed here.

This is the first I have heard of ACTA Publications, although they say:
"ACTA Publications began in 1957 as a publisher of books and audio/video resources for the Catholic market. It has since broadened its editorial scope to include a wide variety of materials for those attempting to live out the Christian faith in their daily lives, on their jobs, with their families, and in their communities. While some of ACTA's material is specifically Catholic in nature, most of the company's products are aimed at a broadly ecumenical audience."
So, if you are looking for a flash drive Catholic Bible, then you might want to check out this product.
Posted by Timothy at 6:45 AM

Email ThisBlogThis!Share to TwitterShare to FacebookShare to Pinterest
Labels: God on the Go, NAB, NRSV

This is a cool little Bible :)

Yeah, they are pretty neat. Although I must say that I would rather carry around a pocket Bible instead!