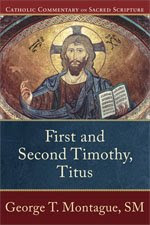 On the right sidebar of this page is a link to the site for the new Catholic Commentary on Sacred Scripture series which began publication last year. Its first two volumes were on the Gospel of Mark and the Pastoral Epistles of St. Paul. These first two volumes were published specifically for this year, since it is both Year B liturgically, which means the Gospel of Mark is read in the lectionary for the Sunday Masses, and of course it is the Year of St. Paul. I wanted to spend at least one post giving some of my thoughts on the series as a whole, as well as some of the features of the individual volumes. Let me just point out at the top that the General Editors of the Series, Peter S. Williamson and Mary Healy, both teach scripture at Sacred Heart Major Seminary, in Detroit, where I just finished up graduate work. While I have never had Dr. Healy for class, I have been fortunate to take three courses taught by Dr. Williamson.
While much of this info can be gleaned from the website, I do want to point out some aspects of this new commentary series which I think are important. First off, I like the fact that they are using the NAB as their base text. While I have been critical of the NAB for its various shortcomings, in my eyes, I do think it is great to see the NAB have a solid commentary keyed to it. While the series does use the NAB, it does point out in the commentary where other translations on a given text from the RSV, NRSV, JB, NJB, and NIV may be better. Therefore, it is possible to use whatever translation you prefer with this commentary series.
Secondly, I am really impressed with the scholars who are a part of this project. Outside of the general editors, whom I mentioned already, the editorial team also includes the following people:
Associate Editor:
Kevin Perrotta - Award-winning Catholic journalist and editor of the Six Weeks with the Bible series. (I have and continue to use his studies with young adults)
Consulting Editors:
Scott Hahn (Franciscan University of Steubenville)
Daniel J. Harrington, SJ (Weston Jesuit School of Theology)
William S. Kurz, SJ (Marquette University)
Francis Martin (Dominican House of Studies)
Frank J. Matera (Catholic University of America)
George T. Montague, SM (St. Mary’s University)
Terrence Prendergast (Archbishop of Ottawa)
It seems to be a wonderful balance of scholars, all of whom have made important impacts on Catholic Biblical scholarship over the past thirty years. I have personally benefited by the works of Dr. Hahn, Fr. Harrington, and Fr. Montague.
In addition to the editorial staff, the project has contributions from various scholars on the different New Testament books:
Volume Authors:
The Gospel of Matthew by Edward Sri and Curtis Mitch
The Gospel of Luke by Timothy Gray
The Gospel of John by Francis Martin and William M. Wright IV
The Acts of the Apostles by William Kurz, SJ
Romans by Scott Hahn
First Corinthians by George T. Montague, SM
Second Corinthians by Thomas D. Stegman, SJ
Galatians by Ronald D. Witherup, SS
Ephesians by Peter S. Williamson
Philippians, Colossians, Philemon by Dennis Hamm, SJ
Hebrews by Scott Hahn and Mary Healy
First and Second Peter, Jude by Daniel Keating
Revelation by Peter S. Williamson
Again, I think this series has the benefit of having contributions from a wide-range of Catholic Biblical scholarship. This can certainly be seen by the large list of endorsements that the series has already garnered.
Thirdly, the series is meant to "serve the ministry of the Word of God in the life and mission of the Church." The goal of the series is to provide "accessible yet substantive commentary" on each book of the New Testament. This certainly is a major need in the Church. Too often Catholic Bible commentaries are either too academic or too devotional. From my experience of using the volumes that have been published so far, this series clearly meets the intended goal.
I also want to say a few things about the volumes themselves. Each volume has considerable introductory material, explaining important issues like authorship, dating, themes, etc... The Biblical text is presented before each section of a given commentary, along with OT and NT cross-references and important references to the Catechism of the Catholic Church. In addition, there are Bible maps, photographs, as well as illustrations included throughout the work. Overall, the layout is very pleasing to the eyes and easy to navigate.
Also included are helpful sidebars that present historical, literary, and theological information. Many of these sidebars have quotations from the Church Fathers, Church Councils, or the Catechism. Some, however, give further depth and context to the text. For instance, there is an extended sidebar, in 1 Timothy 4, which explains "Athletic Training in Paul's Greek World". It includes an interesting quote from Isocrates (400BC) on athletes.
One last feature I want to point out is the index of pastoral topics found at the end of each volume. Since I work in campus/young adult ministry, I have found this little index to be very helpful. It has topics listed from "apostasy" to "youth", covering a variety of topics which are helpful for anyone in pastoral work.
If you would like to see some excerpts, you can see them on the Catholic Commentary of Sacred Scripture site. I highly recommend picking up these commentaries. They provide a wonderful mix of scholarly and pastoral aids which help to provide greater understanding of the Word of God, which will no doubt foster our daily walk with the Risen Lord!
Posted by Timothy at 6:48 AM

Tim, you mention that "it is great to see the NAB have a solid commentary keyed to it" -- is this a swipe at the Collegeville and New Collegeville Bible Commentary series?

Actually, a couple of years ago I met the founders of the Little Rock Scripture Studies, which is, as I am sure you know, the basis of the New Collegeville Series that Liturgical Press publishes. Very nice people!

I looked for something online that addressed this, but this was the the closet thing I found.

As long as we are chatting about Catholic Bible commentaries, I am hoping sometime you might post about your opinions about the Berit Olam and Sacra Pagina series.

For more on the relationship between Liturgical Press (Collegeville) and Little Rock: http://www.littlerockscripture.org/en/about_history.html

In regards to Sacra Pagina, it seems to be more scholarly than the ones mentioned in this post. I remember using the Luke edition, by Luke Timothy Johnson, for a Synoptics class a couple years back. I found it to be fairly helpful. Looking at the contributors to the Sacra Pagina series, in many ways it seems to encompass many of the most prominant Catholic Biblical scholars of the past 30 years.

Have you used either Berit Olam or Sacra Pagina?

I've used three of the Berit Olam (BO) volumes (Genesis and Twelve Prophets [2 vols]) and one of the Sacra Pagina (SP) volumes (John). I found those BO commentaries excellent; but I found the SP John commentary to be weaker than Raymond Brown's commentary.

I like the BO focus on literary analysis of the text.

Reading commentaries is a mixed bag; quality varies depending on the author. Friends tell me that the BO and the SP series are especially uneven. I've seen this in other series: many of the Anchor Bible (AB) are excellent (e.g., Brown's AB John commentary mentioned above) but others are of dubious quality. For example, Josephine Massyngberde Ford (retired faculty from Notre Dame) wrote the AB Revelation volume. She argues that John the Baptist most wrote most of Revelation and that the Virgin Mary wrote Hebrews. These are not views one normally expects to see in an academic critical commentary.

I've used Konrad Schaefer's Berit Olam commentary on the Psalms and found it combines theological acumen and deep spirituality. It is wonderful. You will also find this is the case with Patrick Hartin's commentary on James in the Sacra Pagina series. Other contributions that have struck me as particularly good in the Sacra Pagina series include Brendan Byrne on Romans, Jan Lambrecht on 2 Corinthians, Frank Matera on Galatians, John Donahue on Mark and Luke Timothy Johnson on Luke-Acts.