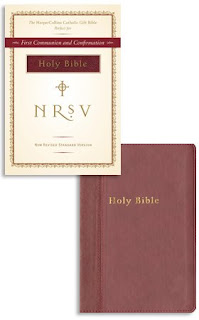 Since it is the one year anniversary of its publication, I wanted to do a review of the HarperCollins/HarperOne/HarperCatholic Bibles NRSV Catholic Gift Bible. While I haven't seen it publicized all that much, I do tend to find this edition available at the local chain bookstores like Borders and Barnes and Noble. (When this edition was published last year, HarperCollins did a press release for it, which you can see here.) Interesting to note, I was at a ministry conference last summer where Harcourt Religion Publishers, who contributed the introductory materials for this edition, was in attendance. I talked with a few of their representatives, but surprisingly they didn't know very much about the NRSV Catholic Gift Bible. Strange?
While the NRSV Catholic Gift Bible seems to be intended as gifts for First Communion or Confirmation recipients, I wouldn't say that this is a youth Bible. It could easily be used by any Catholic no matter how old. The text is the NRSV Catholic Edition (anglicized text), and it includes a concise concordance. Once again there are no cross-references, which seems to be a continuously weird omission for many of the HarperCollins NRSV Bibles. The cover material is the imitation leather/NuTone™ type, which makes it pretty durable. One of the best things about this Bible is its size: 8.5 x 6 x 0.9 inches. It isn't too small, nor is it too big. I really like the size of this Bible! I have found it to be quite handy for ministry activities on campus.
However, what make this Bible even better is the additional material at the beginning. It includes reading guides, an introduction to Catholic Spiritual life, Scriptural Roots of the Apostles Creed, Short biographies of OT and NT figures, a cool picture of Pope Benedict XVI, Maps, chronology of Catholic history, introductions to each book of the Bible, as well as other materials. What makes the book introductions useful is that they contain information as to when the particular book is read during the liturgical calendar. In addition, I have been surprised how often I have referred to the historical timeline. It is formatted in dual columns, one with Catholic history, the other with important world historical dates. Also, while the maps are in black and white, they are pretty thorough. In total, there are 19 maps ranging from the Table of Nations and Cities of Refuge to the Seven Churches of Revelation. An interesting inclusion is a hypothetical map of Paul's 4th missionary Journey to Spain. In sum, I have found that these introductory materials can be useful for people of any age. Those who are new to the faith, would certainly benefit the most.
If I were to change anything about these introductory materials it would be to place the individual book introductions into the Biblical text itself, as opposed to being all lumped together with the other introductory materials. I would also place the maps at the back of the Bible after the concordance, again not with the introductory materials. However, these are only minor quibbles.
If there were two things I would like to see added in future editions, they would be scriptural cross-references, as mentioned before, and a list of the 3-Year Mass reading cycle. It seems odd that while they devote space in the book introductions to mention the time in the liturgy when a particular Biblical book is read, yet they don't include an actual list of where exactly it occurs during the lectionary. In my mind, this wonderful companion Bible would be made more complete with a list of the Sunday Mass readings.
But overall, if you are looking for an everyday Bible that you can use for helping your prayer life, this Bible certainly fits the bill. It would be great to see HarperCollins continue to publish fine Catholic Bibles like this one, perhaps even a Catholic study Bible to compete with the Oxford editions.
Posted by Timothy at 8:01 AM

Tim,I bought this Bible too, and for the price it is not bad. My only complaint about it is that the text is a little squished together, and if the lighting is dim it can be hard to read.
I just bought the Cambridge reference NRSV Bible in the french morocco leather and that size 9 font is very easy to read. I really like that Bible.

I really love that cambridge NRSV reference Bible. Although it was a bit expensive, it has been worth every penny. I think, in regards to quality of production, it is my favorite. I also like the fact that the text is very easy to read, the glossary in the back is actually really helpful, and I love the maps!

To bad it is the NRSV. I do not care at all for inclusive language translations!. The RSV is far superior in my book.

I love this bible...just got it and like the translation. The bible is just the right size. If I could find a New Jerusalem translation bound like this I would love it.

When ever I surf on web I never forget to visit this website[url=http://www.weightrapidloss.com/lose-10-pounds-in-2-weeks-quick-weight-loss-tips].[/url]catholicbibles.blogspot.com is filled with quality info. Let me tell you one thing guys, some time we really forget to pay attention towards our health. Let me present you with one fact here. Recent Research shows that almost 90% of all USA grownups are either fat or overweight[url=http://www.weightrapidloss.com/lose-10-pounds-in-2-weeks-quick-weight-loss-tips].[/url] Hence if you're one of these individuals, you're not alone. Its true that we all can't be like Brad Pitt, Angelina Jolie, Megan Fox, and have sexy and perfect six pack abs. Now next question is how you can achive quick weight loss? [url=http://www.weightrapidloss.com/lose-10-pounds-in-2-weeks-quick-weight-loss-tips]Quick weight loss[/url] is not like piece of cake. Some improvement in of daily activity can help us in losing weight quickly.