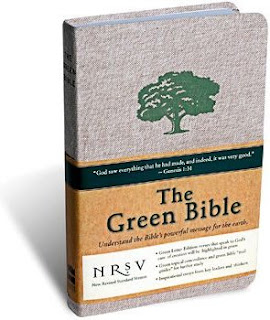 As noted late in 2008, HarperCollins published The Green Bible with much publicity and fanfare. They even created a website for it. At the time of its release, I made some preliminary comments about it. While I felt it had some interesting features, I couldn't help but wonder why they didn't include the Deuterocanonicals/Apocrypha. This makes it even more curious considering the fact that they included an essay by Pope John Paul II. So, at that point, I just decided to forget about the Green Bible, which I pretty much did until I read a review of it in the February edition of Christianity Today.

The review, by Telford Work, does a pretty good job analyzing the drawbacks to the Green Bible. One of his main objections of the Green Bible is that its very purpose, which is to help people "see God's vision for creation and help them engage in the work of healing and sustaining it", seems to simply make the Bible "a vehicle" for a political agenda. While it is important to promote stewardship for creation, which is certainly clear from reading the Bible, it just seems that the editors of the Green Bible came into the project trying to force an agenda into the message of the Bible. This seems to be the wrong way around.

To further his point, he quotes from the NRSV preface, written by the late, highly esteemed Bruce Metzger, where it says: "The Bible carries its full message, not to those who regard it simply as a noble literary heritage of the past or who wish to use it to enhance political purposes and advance otherwise desirable goals, but to all persons and communities who read it so that they may discern and understand what God is saying to them." Touche.

While I encourage you to read the rest of the article for your self, I would like to point out a couple of other places where I think Telford Work makes good sense:

1) "The two testaments' central concerns—covenanted Israel, anointed Jesus, and missional church—are pushed aside by the green passages that testify, or are made to testify, on environmentalism's behalf. Yet if the editors narrowed their criteria or applied them strictly, much less of The Green Bible would be in green, and that would give the false impression of biblical indifference. This double bind makes The Green Bible an awkward witness to the strong theological case that can actually be made for creation care. Despite the publisher's intent, spending time with The Green Bible makes me more aware than ever of the gulf separating ancient Israel from the Sierra Club, and warier of forcing environmentalism, anti-environmentalism, or any other contemporary agenda into passages of Scripture."


2) "The strongest part of The Green Bible is the introductory essays. While their quality is uneven, some stand out as insightful theological affirmations of creation care—particularly those of John Paul II and N. T. Wright. These do the book's heavy lifting. Indeed, they bear nearly its entire intellectual burden."
Posted by Timothy at 4:58 PM

Email ThisBlogThis!Share to TwitterShare to FacebookShare to Pinterest
Labels: NRSV, The Green Bible

Unfortunately, projects like 'The Green Bible' only reinforce the popular mistaken notion that the NRSV is a 'liberal Bible'

You certainly hit on what is a major image problem for the NRSV. I think most of the complaints that it is "too liberal" to be unwarrented. Yet, it also doesn't help that most of the endorsers of the NRSV at NRSV.net seem to be liberal in their theology and Biblical criticism. Perhaps they should get a quote from NT Wright, who typically uses the NRSV in his scholarly works.

I love Telford Work's line:
"Despite the publisher's intent, spending time with The Green Bible makes me more aware than ever of the gulf separating ancient Israel from the Sierra Club, and warier of forcing environmentalism, anti-environmentalism, or any other contemporary agenda into passages of Scripture."

I don't doubt that some passages are pro-creation, but to allocate every passage in green as pro-environment can almost render this bible as inaccurate.