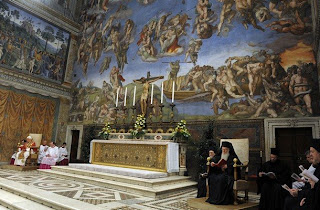 -- Sitting below Michelangelo's massive fresco of "The Last Judgment," the ecumenical patriarch of Constantinople said divided Christians must be changed by God's word and must work harder to bring the joy of the Resurrection to all creation."We must experience radical 'metanoia' -- a conversion of attitudes, habits and practices -- for ways that we have misused or abused God's word, God's gifts and God's creation," Patriarch Bartholomew told the world Synod of Bishops on the Bible.After the celebration of evening prayer Oct. 18 in the Sistine Chapel, Pope Benedict XVI invited the patriarch, the spiritual leader of Orthodox Christians, to address the synod.

When Patriarch Bartholomew, the first ecumenical patriarch to address a session of the world Synod of Bishops, had finished his 25-minute speech, the pope noted that the church fathers quoted by the patriarch are recognized as great theologians in both the East and the West."If we have fathers in common, how can we not be brothers?" Pope Benedict said. "This was a joyful experience of unity -- perhaps not full, but true and deep."

Patriarch Bartholomew spoke to the synod about hearing and speaking the word of God through the Scriptures, seeing God's word in nature and in icons, and touching and sharing God's word in the sacraments and the communion of saints.The word of God, he said, is addressed to all people at all times of history and, therefore, it must be proclaimed in a way that people can understand, and in a way that touches their lives, meets their needs and challenges them to change.

Obviously, the patriarch said, the Christian proclamation of the word would have been "greatly enhanced and strengthened if all Christians were in a position to perform it with one voice and as a fully united church."Pollution, poverty, injustice, war, racism and sexism are all signs that Christians have not done enough to help the word of God spread throughout the world, penetrate and change it, he said."

When the world does not share the joy of Christ's resurrection," the patriarch said, "this is an indictment of our own integrity and commitment to the living word of God."When God spoke and created the world, God proclaimed it "very good," Patriarch Bartholomew said. "All people and all things are created and called to be good and beautiful."But the destruction of the environment has shown that "we have behaved arrogantly and dismissively toward the natural creation," he said."

We have refused to behold God's word in the oceans of our planet, in the trees of our continents, and in the animals of our earth," the patriarch said. "We have denied our very own nature, which calls us to stoop low enough to hear God's word in creation."The patriarch, who has been a leader in promoting a Christian theology of environmental protection, told the synod that Christ, the Word of God, "receives his full embodiment in creation, above all in the sacrament of the holy Eucharist.""It is there that the Word becomes flesh and allows us not simply to hear or see him, but to touch him with our own hands," he said.And within the body of Christ, which is the church, the divine Word also is reflected in the lives and actions of the saints, he said.Called to be one with the communion of saints, all Christians have an obligation "to touch the world with the mystical force of God's word so that -- as the extended body of Christ -- the world, too, might say: 'Someone touched me,'" he said."

Evil is only eradicated by holiness, not by harshness," Patriarch Bartholomew told the synod.He said holiness is a seed that when planted in a society will bloom, touching and healing others.Even if small, he said, "it is like the tectonic plates of the earth's crust: the deepest layers need only shift a few millimeters to shatter the world's surface."

All Christians are called to holiness, the patriarch said. Striving for holiness is the only sincere response to hearing the word of God and receiving the Word of God made flesh in the Eucharist.The surest sign that a spiritual change has occurred is a willingness to share all things with all people, he said."Sadly, we have ignored the vocation and obligation to share. Social injustice and inequality, global poverty and war, ecological pollution and degradation result from our inability or unwillingness to share," he said.

Before offering the synod members his blessing, Patriarch Bartholomew said all Christians, especially Christian leaders, are called to discern, highlight and strengthen the traces of God's word in a world often marked by evil."As we struggle -- in ourselves and in our world -- to recognize the power of the cross, we begin to appreciate how every act of justice, every spark of beauty, every word of truth can gradually wear away the crust of evil," he said.
Posted by Timothy at 6:46 AM

I am really encouraged with Catholic - Orthodox ecumenism. I believe this is the first bridge we must mend, and then work on all the others. For it is our Lord's prayer to God our Father that we be one. This should be our prayer too!

I agree 100%. What a witness to the rest of the world would it be if we could mend the bridge with our Orthodox brothers and sisters.