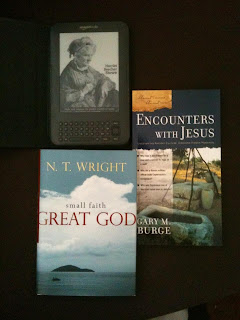 Merry Christmas to you all! Hope all is well wherever you are. Know that my prayers are with all of you during this Christmas season. I just thought I would check in to let you know of a few Bible-related goodies I received from my family over Christmas. First off is the Amazon Kindle (wifi version). I was on the fence about whether to get this product, but thought about how useful it would be in leading Bible studies. Needless to say, it is a pretty neat product, particularly because of its portability and long-lasting battery. The first things I downloaded onto the Kindle were the Ignatius Catholic Study Bible New Testament, Pope Benedict's Jesus of Nazareth, and some popular works from Chesterton and Lewis. A good start I think. Secondly, I received NT Wright's Small Faith, Great God which is a reprint of an earlier publication dating back to the late 70's. I have already begun to read some of the chapters and perhaps will make some comments on it in the future. Finally, I also received Gary Burge's Encounters with Jesus. I had read his previous two entries in the series, Jesus the Middle-Eastern Storyteller and The Bible and the Land, which provided some interesting insights which I had not considered. Even though this series of books comes from a Protestant perspective, I think there is much to be considered for a Catholic reader. These books are not all that long, but are lavishly illustrated in order to set the context and environment of the Biblical narrative.
Again, have a blessed Christmas and happy New Year!
Posted by Timothy at 9:54 AM

Email ThisBlogThis!Share to TwitterShare to FacebookShare to Pinterest
Labels: personal

Merry Christmas Timothy! I also received the Kindle (wifi) and I love it. I downloaded the Ignatius Bible which I love reading it in large print. I also downloaded; Life of Christ, How the Catholic Church Built Western Civilization, Rome and Jerusalem-the clash of ancient civilizations and others. The Kindle won't replace my need for a 'real' Bible for most uses, but when you are reading a book that refers to a biblical verse, it is nice to have it right there! I hope when the revised NAB comes out next year that they will release it on Kindle and the other e-readers.

Yeah I have liked having the Kindle so far. It is really nice having these study tools all on one thin device. I will be interested to see how I will use this next time I lead a bible study. Merry Christmas to you and your family.

I believe the highlights and notes also sync, so it is very powerful.