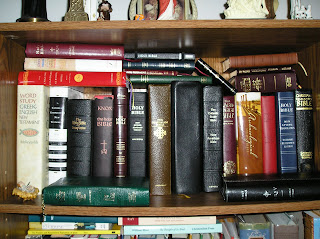 I think it is great that the shelf that is holding these Bibles is beginning to bend.
Posted by Timothy at 5:47 PM

I count 26. Not bad. How many distinct versions?

If I am allowed to include all of my partial translations, which include only the Old Testament or only the New Testament, or only certain books, then I have around 30, but some of them are duplicates. For example, I have 4 different copies of the RSV, two of the NRSV, two of the NAB and two of the ESV. Getting rid of the duplicates I have 18 different versions.

Timothy, may I ask, why have you been so interested in the ESV? Of course, any new translation doubtlessly has some benefits for us, but in my reading of the ESV Apocrypha, I find it to be quite close to the RSV Deuterocanonicals. Perhaps in a universe in which we did not have the RSV and NRSV, then the presence of the ESV would be novel, but since we have excellent editions of both of those works, I am not sure that the additional marginal value of the ESV is that great.

For example, for studies of the Deuterocanonicals, I find the new Oxford New English Translation of the Septuagint to be the most useful translation to have appeared in the last few years (and, of course, there were Catholic and Eastern Orthodox scholars who worked on that translation, although it was not sponsored by any religious organization.)

I am not sure if your photograph in this post represents a complete inventory of the Bibles that you own, but in case it does, please forgive me in advance for my audacity in making some purchase suggestions:

First, I would recommend the NETS Bible, listed above.

Second, I think you might enjoy some Jewish translations: many people like the Oxford Jewish Study Bible which contains the New Jewish Publication Society translation (which is genuinely different than the translations you have and directly interacts with the Hebrew); alternatively, you may like the nice Hebrew-English diglot. For another Jewish translation, I can also recommend Alter's translations of the Pentateuch, Samuel, and Psalms.

Third, if you want a genuinely liberal (and brilliantly translated) Catholic Bible, I can recommend the The Inclusive Bible.

Fourth, I would suggest you may enjoy a copy of the New English Translation (NET) Bible. Not only is this a fresh translation, but there are extensive notes that interact with the original language, making this a sort of annotated Bible. This is a Protestant translation, to be sure, but it far more scholarly in its notes than most annotated Bibles. Given you obvious interest in Greek, I can heartily recommend the Greek-English diglot in particular.

Sixth, I think a Latin Bible is invaluable for study -- of course, a Nova Vulgata is invaluable, but I find the Stuttgart Vulgate to be the most interesting.

Seventh, if you read French, you may find the third French edition of the Bible de Jerusalem to be a worth investment. It is quite different than the English version.

Eighth, if you read Spanish, you may find the Biblia de Navarra to be an interesting conservative Catholic translation. There is, of course, a far more comprehensive annotated edition in Spanish and Latin. (It does not qualify as a different translation, but I should notice that are a variety of editions containing English translation of the conservative notes [which have a strong Opus Dei flavor since they often quote Josemaría Escrivá] along with the RSV-CE and Nova Vulgata translations published as the Navarre Bible.)

Regardless of the merits of the ESV, since you already have a number of excellent RSV and NRSV editions, I suspect you would find any of the above works to provide a fresh (and more different) perspective to your Biblical reading.

I wish you great success in your studies, your ministry, and spiritual path.

I think I have around 24 distinct English Bible versions. Of course if you consider the NAB, there have been 3 updates of it since 1970 with another on the way.

Thanks for your comments. I am glad you brought up the New English Translation of the LXX, since that is one of the next Bibles that I will be ordering. So many Bibles, so little money!

Let me also say thanks for your other Bible suggestions. The NET Bible, JSB, and the Stuttgard Vulgate are also high on my list. I do own various editions of the English versions of the Navarre Bibles, as well as a copy of the complete Dead Sea Scrolls. Not a huge fan of the Inclusive Bible however.

Speaking for myself, it is a disease! :)