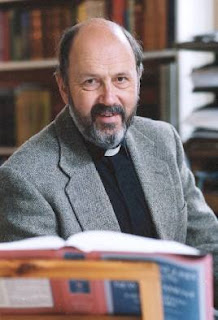 Noted Biblical scholar, and Anglican bishop, N.T. Wright attended the October Synod of Bishops in Rome. It's theme was "the Word of God". While we may not see the fruits of this Synod for some time, Bp. Wright has some reflections on what he took from the Synod.
"Three months ago I had the privilege of being the Anglican Fraternal Delegate at the Synod of Bishops in Rome. The topic was "the word of God", and it quickly became clear that it carried enormous ecumenical implications.....continue.
By the way, recently I have been trying to re-read Wright's Paul: In Fresh Perspective but have been occupied by reading for Trinity/Christology class. Hopefully I can pick it up sometime this weekend, but that will depend on how fast I can get through St. Gregory of Nazianzus' Third and Fourth Theological Orations.
Update: I spotted a talk by NT Wright on the NT Wright Page sight. It was recorded this past January at the Catholic Cathedral Church of St. Mary in the UK. While the main talk is centered on Paul, Bp. Wright does speak briefly in the beginning about his experiences at the Synod of Bishops.
Posted by Timothy at 8:42 AM