The LXX and the DSS 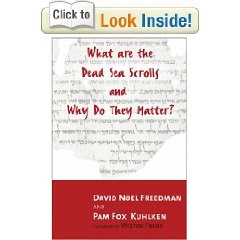 I was recently at a Cokesbury Christian book store where I spotted, in the half-off section no less, the book What are the Dead Sea Scrolls and Why Do They Matter? Being half-priced, I naturally purchased it along with some other discounted books. Since the book is written in a handy questions and answer format, I thought it would be a good primer for the issues that surround the Dead Sea Scrolls. Through my studies at seminary, I have certainly been introduced to the importance of the Scrolls and how they have impacted textual criticism. One question I always wondered about was how the DSS related to the Septuagint. While reading this book, I was happy to see that the authors, Freedman and Kuhlken, address the issue:

Which of the two texts- LXX or the MT- represents a more accurate tradition?

"This is a serious issue. On the one hand, the Septuagint reflects an earlier version than the Masoretic Text. The MT can't be traced back as far as the LXX, and it seems to reflect a number of instances when rabbis had to make hard choices about which particular texts were original and what particular words meant. It also reflects a great deal of haplography......

On the other hand, scholarly attitudes towards the LXX have gone through a lot stages over the years. It has been considered a very accurate, literal rendering of an underlying Hebrew text- and it has ben considered a paraphrase of something that doesn't conform to any Hebrew text.

But the more information that comes in, especially from the Dead Sea Scrolls, the more the LXX appears to be a literal translation of an original Hebrew text. In fact, it appears to be a very literal translation, so much so that in many ways it differs from classical Greek. The translators made deliberate efforts to preserve the original syntax, word order, and so forth of the original Hebrew rather than attempt to achieve an attractive style of Greek....."

So, here are a few of my questions about the previous statement:

1) What do you think about the analysis of Freedman and Kuhlken on this issue of the LXX?

2) Are we not already moving away from reliance on the MT, since many translations are now adopting an eclectic text for the OT?

3) Is there a good reason to simply translate from the LXX for the OT? I know that this is already done in the Orthodox Churches.
Posted by Timothy at 9:58 AM

An example would be,

In the wilderness prepare the way of the Lord,
in the desert make straight a highway for our God.

But the LXX failed to see this and tells us that

A voice cries out in the wilderness: Prepare the way of the Lord, in the desert makes straight a highway....


If there were commas in Hebrew, the LXX could be accused of moving one, but since there are not, it's just a mistranslation.

The reason it stays with us is that the Gospels quote this passage in Isaiah, and the Apostles used the LXX.

As a student of Hebrew, I will always look to the Hebrew text -- and the MT is the backbone of that. The LXX is the first place to look to clarify obscure passages, but NO translation is as good as any original, even an old and venerable translation like the LXX.

Thanks for your great comments once again. What do you think about the fact that many English translations are now going to more of an eclectic text for the OT? This is obviously the case with the DSS discoveries and the importance that many scholars are putting on them.

I don't see it as a problem.

The MT itself was made up of several different MS, wasn't it? The prologue to my BHS (Biblia Hebraica Stuttgartensia) states, "The great Masoretic manuscripts, such as L [the Leningrad Codex on which the BHS is based], were composed by transcribing texts from individual manuscripts of different parts of the Bible. These manuscripts were themselves copied from manuscripts which derived from a variety of commentaries, often representing rival schools of scribes and Masoretes."

A page of BHS is covered with margin notes and footnotes -- masora -- that comment on what other interpretations there are for various words, letters, verses.

I don't really see anything wrong with the DSS contributing its share of masora to the text we have. Someone somewhere has to make a decision -- is earliness the test of accuracy? Or acceptance? Something else?

I wish I knew more about the history of the text itself, but i'm not quite there, yet.

I do know that ALL English translations are missing a good chunk of the Bible -- the nuances, the dirty jokes, the imagery, the double entendres and puns. You can get two very different translations in English from the exact same verse of Hebrew and both of them would be correct interpretations -- there is just no way to give a complete interpretation of the Hebrew and still be correct English.

The fact that somehow God's truth gets through to us at all in translation is proof to me that it is, indeed, God's word!

The LXX texts are at least 1200 yrs older than the MT text as is the DSS. I have read that the DSS agrees more often with the LXX when there is a dispute with the MT. I have also read that the later translaters of the MT wanted to remove some of the references that the Christians were using (in regards to the messiah) to prove that Jesus was the coming Messiah.
Matthew 3:3 quoted the LXX version of Isaiah 40:3 (as did the other Evangelists) according to the notes in the Jerusalem Bible; 'The voice of Yahweh addressing the prophet. The evangelists quote this text in its LXX form: 'A voice of one who cries in the wilderness...'; for them this is the voice of John the Baptist, the forerunner of the Messiah.' The LXX was quoted by the Evangelists over 2/3 of the time, when quoting from the Old Testament. I think this all has to be taken in when we compare the LXX to the MT. This Hebrew parallelism, in this verse may have been a later addition in the MT text (adding the word desert to the verse. The LXX was the 'scriptures' in the first century Church, which should be an important fact for us.

sorry I had to go as Anonymous, I have had a problem logging on the Google account and this was easier.

I agree that the LXX should be important to us - but if our goal is to know what the sacred authors wrote (as opposed to what they translated), then the MT must be used as well.

Errors and misinterpretations are impossible to avoid in translation. There must be some in the LXX.

The ideal is to recreate the original Hebrew & Aramaic texts, and all sources (MT, LXX, DSS and other fragments and early translations) should be consulted. I would be very wary of favouring one source simply for ideological reasons.