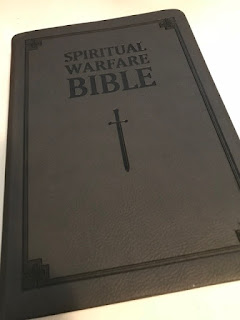 It was about seven years ago that Saint Benedict Press/TAN released the Catholic Scripture Study International Bible (RSV-CE).  When I reviewed it, I remember appreciating a lot of what went into its production, even though I thought there were some key components, like cross-references, missing.  I still have that bible today, and when I need an RSV-CE I will often refer to it.  It has held up pretty well over the years, which is a good thing since I was concerned about the glued binding.  I wasn’t then, nor do I remain today, a fan of glossy inserts, but they were placed well and the paper was fairly thin, thus not causing any issues when flipping through the bible or when laying in flat on a table. 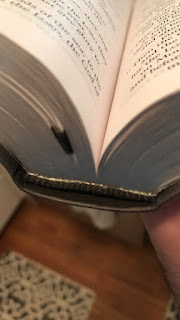 Now back in 2014, SBP/TAN released Manual for Spiritual Warfare, which was a handbook of prayers and reflections on engaging in spiritual warfare.  The book, authored by Paul Thigpen, sold quite well.  Now enter the brand new Spiritual Warfare Bible (RSV-CE) from Saint Benedict Press, which utilizes much from the Manual for Spiritual Warfare, integrating into the RSV-CE text.  While the description of this bible says that it contains “nine special Spiritual Warfare inserts” written by Dr. Thigpen, in truth, that is a bit misleading, but in a good way.  Each of these nine topics take up, on average, at least ten pages of print.  The topics range from “Scripture for the Battle” to a “Spiritual Warfare Topic Index”.  In particular, the section titled “Prayers for the Battle” contain a number of very beautiful prayers, including one entitled ‘Prayer to Our Lady, vanquisher of the Enemy’.  Compared to the CSSI Bible, this bible contains considerably more content than the CSSI Bible.  The inserts in the CSSI Bible were typically one page in length, on a variety of apologetic topics.  The glossy inserts in the Spiritual Warfare Bible also contain some well-placed and beautifully rendered classical art, which is nicely placed at appropriate locations within Thigpen’s text.  Many of them, like the one of Our Lady (pictured below), are great to pray with.  While there are no maps or cross-references in this bible, it does contain an appendix which has all the Mass readings, both for weekdays and Sundays. Also, the words of Christ are in red. 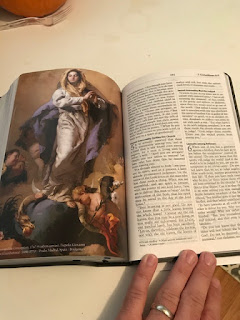 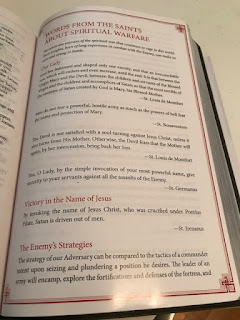 In regards to construction and overall look, the Spiritual Warfare Bible is very similar to its older brother, the CSSI Bible.  The RSV-CE is presented in a fairly large script, with the words of Christ in red.  I have always found this to be one of the best visual representations of the RSV-CE on the market today.  The text is quite easy to read from, even though it is not line matched.  It contains three handy black ribbons, which should certainly be mandatory for a bible like this.  The binding is glued but the cover is a smooth premium ultrasoft synthetic leather cover.  The cover has a much nicer than the CSSI Bible cover, which was a more stiff bonded leather.  The cover has a blind imprinting, which is also a step up from the early CSSI Bible.  The size of the The Spiritual Warfare Bible is 6.75 x 9.5 x 1.5, which is roughly the same size as the CSSI Bible. 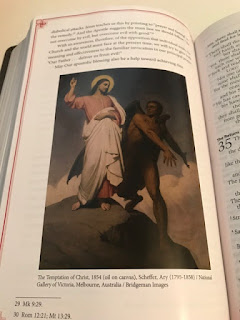 I could see this new volume to be popular in certain prayer groups, as well as in charismatic Catholic circles.  The content would certainly fit into those who are associated with apostolates dedicated to doing spiritual warfare or intercession.  The Spiritual Warfare Bible has a very nice overall feel to it and is a true joy to read from.  The question will be whether or not the reader is willing to pay $69.95 for this bible.  While it does have some wonderfully composed and organized content on spiritual warfare, it suffers from having a glued binding.  In the end, I can see that some might purchase this, while others may take a pass on it.

Thank you to Saint Benedict Press for providing me a review copy for this post.
Posted by Timothy at 5:44 AM

So each insert section contains about 9-10 insert pages?

Typically they are 5-7 pages, with text on both sides.

Timothy, how much of the material is substantively different than the Manual? If someone has the Manual, is there a reason to buy this Bible, other than maybe wanting the convenience of the prayers and other information in their Bible, or to have a decent copy of the RSV-CE?

I don’t own the Manual, but the copyright page of the Bible suggests that most of the glossy insert material comes from it.

It's nice to see another Bible for Catholics to choose from! It has some good features. I hope to live long enough to see artwork, topical index, list of Mass readings, and three ribbons (at least!) become the norm for Catholic Bibles. Oh, and each having a large print edition. :-)

I hope, someday, to see a sewn Catholic bible with a REAL leather cover. I've got some old Confraternity Versions that have pretty nice leather covers but, and few people know this, Vatican II issued a decree that all Catholic Bibles post 1965 had to be bound as cheaply as possible with cardboard taking pride of place.

Yes, that document, Liber Crapicus, isn’t as well known as the others. :)

I don't want to be excessively critical but I purchased a fancy bird book a few years ago from National Geographic and it was better bound than any Catholic bible I've seen and it cost about 60 dollars. It was printed in China. Given the number of color illustrations, there is no reason why a good Catholic Bible cannot be well bound and affordable.

Don't get me started. It is RIDICULOUS that there are so few quality bound and covered Catholic Bibles available. Even the revised NABRE Study Bible (edited by Donald Senior) by Oxford is no longer available in genuine leather. It's really shameful. And Oxford's NRSV annotated Bibles (RSV, NRSV, and REB) don't really count, because they're ecumenical editions. Catholic Book Publishing Co's St. Joseph's NABREs are nicely formatted and bound (sewn), but even with them, the best you can get is a bonded leather cover. Blech. Come on, Catholic publishers... of course, there have to be Catholics willing to support their efforts. I won't buy St. Benedict Press bibles, in spite of the quality of the content, because they simply are not worth it due to the glued binding.

On another note, Hahn's study on Romans was just released! Gold.

I got Hahn’s Romans commentary too. Hope to have some info on that in th coming weeks whenever I can find time.

What version of the rscv is this ?

Does anyone know who sells the rscv with the 1971 NT ?

I think oxford does , any input ?

My understanding was that Oxford did in those Readers and compact editions, where they had a sort of hybrid 66/71. The readers are hard to come by. I have a compact on the way and can check when I get it.

Thanks Tim, yes the compact please check , there is also a large print too.

Looking forward to your reply?

It appears to be the ‘66 according to the copyright and info compared with on this site:
http://web.archive.org/web/20071218022237/http://umsis.miami.edu/~medmunds/RSVCEdiff.htm

This is good to.

Do you know anything about the common bible ? Did it get the Imprimatur

I think I am confused , I have searched on Biblegateway.com on the rscv it doesn't seem updated to that link then on ewtn.com it seems they have updated from what I searched .

Little confused maybe rscv is already updated to that link of changes pasted.

Do you have an Ignatius Bible or a tan books versions and check if they are updated to that link I sent !!!

I was asking about the common bible and the 1971 nt update as I thought that it might not be updated in the popular rscv versions but ewtn.com search on the rscv is coming up good ?

Hope to hear from you soon.

tim can you please confirm for me john 19:5 in your oxford compact you have received in john 19:5 does it say...here is or behold the man?

Could you please again check the same passage in the spiritual warfare bible SBP/TAN version that would be further help .

so i know oxford is a fail

then that would leave the Ignatius version

thanks for your patients Tim

If you could send me an email reminder on a Tuesday I’ll look it up for you. I left it at work and will not be able to check it out until then.

The 1966 RSV-CE has “Here is the man” at John 19:5. All current editions of the RSV-CE in print have the original 1966 text, including Oxford. It is rumored that the original Oxford RSV-CE’s were hybrids between the 1966/1971 NT text, but I have never seen one. (I have the Reader’s Edition, large print, and compact editions.) The online RSV-CE is a hybrid text, as well as on the Ignatius app. Also, the 50th anniversary RSV Oxford was a hybrid text, but that was not marketed as a “Catholic Edition.”

So you can confirm all 3 oxford, Ignatius and TAN are all original 1966? "here is the man"

In that case it would leave one last player,scepter pubs?

If you live near a catholic book shop you could walk in and check?

After all these catholic bibles why couldn't someone just modernise and update the Douay Rheims, job complete .

Both the Ignatius Press and Scepter RSV-CEs are exactly the same thing with different covers. They are either the original 1966 edition reprinted by Thomas Nelson, or they are are the Oxford editions. Both publishers simply added their own covers to the same book blocks.

Tan/St. Benedict Press have their own unique format. They credit Harper One for arrangement to publish their edition. As I said, all these editions conform to the 1966 text. I have them all. If you are looking to buy an edition, the Tan Editions are very nice to read from if you want a medium-size Bible.

I think my mission is over with this version.

Thanks for both your help Tim and Jonny .


When will they realise a modern,updated,corrected Septuagint 21st century Douay Rheims.

I already have a confraternity.