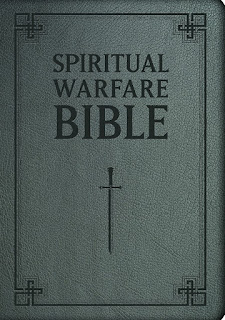 All I can say is that the binding on this bible better be sewn and there should be a whole lot more than just nine glossy inserts to justify that price.

That's a crazy price for the product. If it's St. Benedict Press, it won't be sewn. They don't do sewn Bibles, even with the genuine leather ones, unless they've recently changed that. Which is why I won't purchase Bibles from them. It astounds me that they use real leather for some of their Bibles, but glue the pages.

Because, as Leighton pointed out, they use glued binding for ALL covers, I would only buy Paperback Bibles from them if they interest me.

You know, the inserts might not just be single page. Just sayin'.

Yeah, $70 for a glued binding, synthetic cover, and nine inserts? That a quarter will get you a cup of coffee.

Forget the price or whether the binding is glued or not. What makes me go "Ugh" is that description. It's all fire and brimstone, fear-based nonsense. No thank you.

That is an excellent point.

Actually, I rarely find that's the case with most "spiritual warfare" discussion, at least in a Catholic context. Most on this board will know I'm about the least apocalyptic person possible, but even so, I still find that spiritual warfare is at the heart of the Catholic experience.

To secular friends and casual Protestants, I often speak of Catholicism as a kind of yoga: a specific discipline and practice that strengthens the spirit and tempers behavior and motivation. The idea that the struggles of this life aren't merely situational, but have spiritual motivators behind them is entirely consistent with a Biblical view. Why shouldn't we, therefore, strengthen ourselves through the sacraments, fasting, prayer, and almsgiving to withstand such obstacles, and to have focused scripture resources available to support that effort?

Thigpen is hardly a snake handler.

The Catechism certainly addresses spiritual warfare, and I believe there's even an inset in the Didache Bible devoted to it. Frankly, there's a certain camp value to the binding I find appealing in an ironic way. It's got a kind of retro-WWI Protestant / Salvation Army look to it that makes me smile. I would love to see what's in it.

The description doesn't seem to be "fear-based nonsense." I say this cause I read the reviews on Thigpen's book and it seems to have exactly what we ought to know. If being aware of the Church's teachings on angels, demons, and spirits and putting them into practice is "nonsense", then we are going to have to have a different world view from Paul who knew about the "Prince of the air."

I have the Eucharist, prayer (LOTH & Rosary), am consecrated to Jesus through Mary, and read the Bible regularly. I think I'm already armed fairly well for battle. ;)
The cover looks good, and I'm curious as to what the non-biblical content is like, but I have a Bible I'm happy with.

This will almost certainly be the same as the Catholic Scripture Study Bible, except with a different cover and different inserts, as dimensions are the same for both.

I'm not overly fond of the "spiritual warfare" metaphor but it's certainly the truth, alas. It's not fake news that this life is a fight versus our selfish nature, the evil in the. world caused by bad actors and the evil the demons do. But on the encouraging side is we do have weapons of defense.

TAN and Thigpen published The Manual For Spirtual Warefare which I have. I'm thinking that this Bible takes the material from that publication and repurposes it into a Bible format.
Keith

Here is an interview with Paul Thigpen (editor of this Bible edition) from America magazine.

Before his conversion, he served as a Pentecostal preacher, and it seems that he is particularly sympathetic to the Catholic charismatic movement. A notable quote from the interview:

Q: If you could say one thing to Pope Francis about fighting the Evil Spirit, what would it be?

A: Holy Father, I urge you to support and encourage the training of more exorcists worldwide and to make sure every diocese has at least one. The need for them is growing.

Thanks Theophrastus, I found that interview interesting. He counters the “millataristic” with, e.g., the encouragements of 1Cor.10:13, Psa.16:11, etc - and of course his book is about SAINTS who are models of VICTORY in our contest.
Shalom!


p.s. I especially like the two interview questions just before the one you quoted:

“Who have been the biggest influences on your faith and writing?

What is your favorite Scripture passage and why?”