Daniel: Under the Siege of the Divine 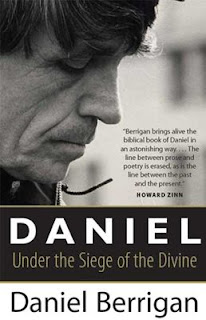 Over the past few weeks, I have been enjoying reading through the late Fr. Daniel Berrigan's commentary on the Book of Daniel.  Daniel: Under the Siege of the Divine was re-published by Plough earlier this year in a very beautifully bound and typset edition.  Fr. Berrigan was a priest and poet, who many recognize as one of the great antiwar activists of the past generation.  Arrested over fifty times for non-violent protest against nuclear weapons and war, Fr. Berrigan rose to prominence in the late 1960's through his involvement with the Catonsville Nine.   Yet, perhaps unknown to many, Fr. Berrigan wrote a number of biblical commentaries later in life, including books on Ezekiel, Isaiah, and the historical books of the OT.  This commentary on Daniel is a social and political one, which connects the lived experience of people at the time of the Babylonian exile with the realities of today.  This is not a technical commentary, but rather a spiritual/application one.  Even though it was first published in 1998, it remains very applicable to the world we live in today, perhaps even more so.  Any of you who are familiar with the work of Fr. Berrigan know that he had the rare ability to be both outspoken and poetic.  This commentary certainly exhibits these qualities in full, as the book's description makes clear:

A bold and unorthodox application of the Old Testament to current political and social discourse, Daniel is not simply a book about a bygone prophet, but a powerful charge to all people of conscience. As Berrigan writes, “There are principalities of today to be confronted, their idols and thrice-stoked furnaces and caves of lions, their absurd self-serving images and rhetoric. Someone must pink their pride, decode the handwriting on the wall. Who is to stand up, to withstand?”

So, if you are looking for a different style of commentary than you are accustomed to, one that is a more direct, yet poetic, critique of the modern world through the lens of the bible, I'd recommend getting a copy.  I have enjoyed every page of it and hope that they republish some of his other commentaries in the future.  Daniel: Under the Siege of the Divine is available in both hardcover and Ebook.

I've been looking for some new books to read (new to me at least), and this looks like a good one to put on my list. I am nearly finished with the 'Name of the Rose'. I don't want to comment on his politics directly, but I do wish to mention that those who think religion has no place in the public sphere need to think of both the anti-war movement and the Civil Rights movement.

Jerry: and the abolitionist movement!

Shortly after my conversion I very much enjoyed reading his similar commentary on the 2 books of Kings, entitled "The Kings and Their Gods".

I have that one you mentioned on order.

I ordered this book from our local library system. It should take about a week; can't wait!

Let me know what you think!

I'm wary of Berrigan. In a book he remarked that he would not die for the Eucharist, except in “an extraordinarily secularized kind of context.” Given his courage in general, that seems to indicate a surprisingly tepid belief in the sacraments.