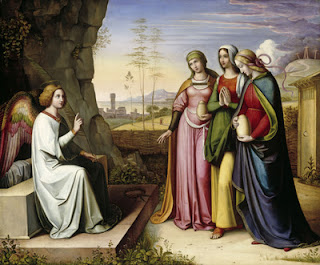 After the Sabbath, as the first light of the new week dawned, Mary Magdalene and the other Mary came to keep vigil at the tomb. Suddenly the earth reeled and rocked under their feet as God’s angel came down from heaven, came right up to where they were standing. He rolled back the stone and then sat on it. Shafts of lightning blazed from him. His garments shimmered snow-white. The guards at the tomb were scared to death. They were so frightened, they couldn’t move. The angel spoke to the women: “There is nothing to fear here. I know you’re looking for Jesus, the One they nailed to the cross. He is not here. He was raised, just as he said. Come and look at the place where he was placed. “Now, get on your way quickly and tell his disciples, ‘He is risen from the dead. He is going on ahead of you to Galilee. You will see him there.’ That’s the message.”
-Matthew 28:1-7 (MSGCE)
Posted by Timothy at 12:00 AM

Email ThisBlogThis!Share to TwitterShare to FacebookShare to Pinterest
Labels: Easter, Liturgical, The Message

Naturally I had to compare this passage with 3 other Bibles, a bad habit when all that is appropriate is to wish everyone a Happy Easter!

A Happy and Blessed Easter to everyone! He is risen indeed!

As my mom would say: jajajajaj

Hey Tim, I seem to recall you were reading Revelations of Divine Love? Did that work out? I'm always tempted to read that but never seem to get around to it.

Still want to get to it. Got distracted with some other books.....which isn't a bad thing.