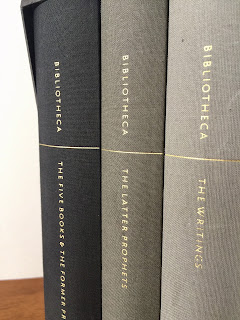 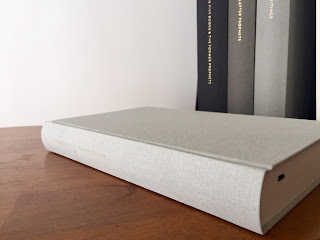 Thanks for the wonderful review. I was an early supporter of this effort, yet, after great length of time with no updates (as to the production delays), and a very long time of dense emptiness, I backed out. In addition, I had some concern with the choice of scripture translation. I won't be buying this edition, yet (as usual) a moan emits from deep within...Where are such Catholic editions? I'm glad there are two (somewhat) similar editions available: The ESV six volume reader's Bible, and the Bibliotheca edition. Kudos to both for taking the time and effort to produce fine quality, accessible Bibles.

It looks like a great idea, though I am a bit uncomfortable with the Psalms not being numbered. Even when I am a reading fiction I like to go back and re-read sections. My main reason for rejecting this is simply budget. I buy all my books online and in good quality used versions and this won't be available used for a long time. I do hope the project meets with success.

I'm guessing they left out "Jehovah".

This was my primary reservation regarding this project. I dislike use of either Yahweh or Jehovah, and such use is not in keeping with the principles of Liturgiam Authenticam.

Can anyone confirm that the Divine Name has been dropped in this edition?

According to a commenter on the "Bible Design Blog" (David, 12/23/2016) who just received his copy it renders the tetragrammaton as "YHWH".

Little bit pricey but it comes out to $35-36 per volume if you order the 5-volume hard cover set. I'm not sure how you can improve such a literal translation without a lot of work.

It's more expensive now. Original backers of the Kickstarter project only paid $75 (well, and waited 2.5 years) for the 5-volume set.

I expected copies to appear on ebay by now, surprised not one has been put up yet.

Read my review of the American Literary Version translation used in Bibliotheca at the following link: http://pngboyd.blogspot.com/2017/12/review-of-american-literary-version-of.html

Is there a Catholic translation 'reading Bible' or is this translation in conformity with Church teaching?