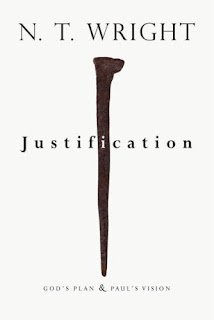 Scot McKnight, who is a popular Protestant speaker and biblical scholar, has begun posting his thoughts on the new book by NT Wright which deals with the issue of St. Paul and justification. The book is in response to criticism Wright has faced from Christians of the Reformed tradition, most notably the very influential John Piper. Wright is in favor of the "New Perspective of Paul" school, which was built by such prominent biblical scholars as EP Sanders and James Dunn. If you would like to read a brief overview of the "New Perspective", you can go here and here.

Below is a description of Wright's new book:
The work of Anglican bishop N. T. Wright on the topic of justification and Paul has provoked a focused yet enthusiastic wave of controversy in certain theological circles. Reformed theologian and pastor John Piper has recently published a strong critique of his ideas. This book is Wright's gracious yet pointed response to Piper and others who would claim that his understanding of the doctrine of justification is potentially dangerous and even destructive to the integrity of Paul's message and ultimately to the meaning of the gospel. Here Wright not only responds to his critics but also provides his most lucid explanation yet on the so-called new perspective on Paul, clarifying misunderstandings and providing a full articulation of his views. This irenic response is an important contribution for those on both sides of the debate-and those still in between. Whether you're a fan of Wright's work or have read Piper's book and would like to know the other side of the story, here is a chance to interact with Wright's views on the issues at stake and form your own conclusions.

The introductory post, at Scot McKnight's Jesus Creed Blog can be read here, followed by the most recent here. While this is a "purely Protestant debate", as Scot points outs, I think it is essential that all Christians, including Catholics, keep up on these important debates within Christendom. I plan to pick up Wright's book sometime this week, since I now have plenty of time to do more reading with graduate course work being all completed! Yippie!

If anyone is interested, perhaps we could have a series of discussions on this blog about the issues focused on in Wright's new book. Yeah, that's right, a "Catholic Perspective on the New Perspective of Paul". If interested, please indicate in the comment box. Obviously, you will need to pick up the book in the next week or so.
Posted by Timothy at 7:29 AM

I am somewhat familiar with the "New Perspective"... it was one stepping stone towards my conversion to Catholicism, but not because of its content... more because of its credibility. If there are multiple credible readings on a topic as fundamental as being in a right standing before God, then the Bible is not "perspicuous" on its own, and God must have "other things" fill in the gap (Tradition, Magisterium). Or so I figured...

Some fairly simple insights into Rom 4:4-5 and Rom 7:1-4 unwound the whole Protestant schema in my own journey to date. I now believe that Paul's major concern is as follows:

Really the concern is, "How do we get a new nature?"

Generic Viagra (sildenafil citrate; brand names include: Aphrodil / Edegra / Erasmo / Penegra / Revatio / Supra / Zwagra) is an effective treatment for erectile dysfunction regardless of the cause or duration of the problem or the age of the patient.
Sildenafil Citrate is the active ingredient used to treat erectile dysfunction (impotence) in men. It can help men who have erectile dysfunction get and sustain an erection when they are sexually excited.
Generic Viagra is manufactured in accordance with World Health Organization standards and guidelines (WHO-GMP). Also you can find on our sites.
Generic [url=http://viagra.wilantion.ru]Viagra 100mg pills[/url] is made with thorough reverse engineering for the sildenafil citrate molecule - a totally different process of making sildenafil and its reaction. That is why it takes effect in 15 minutes compared to other drugs which take 30-40 minutes to take effect.
[b]Viagra Cia Washington Post
Generic Viagra Soft Tabs
apcalis comparison levitra viagra
Gm Viagra
Cheap Viagra The Uk
viagra where to really anonymous
lawsuits viagra heart attacks
[/b]
Even in the most sexually liberated and self-satisfied of nations, many people still yearn to burn more, to feel ready for bedding no matter what the clock says and to desire their partner of 23 years as much as they did when their love was brand new.
The market is saturated with books on how to revive a flagging libido or spice up monotonous sex, and sex therapists say “lack of desire” is one of the most common complaints they hear from patients, particularly women.